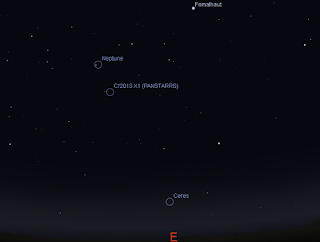 Eastern morning sky at 4:00 am ACST, 16 May as seen from Adelaide. Similar views will be seen elsewhere in Australia at the equivalent local time (and most of the Southern Hemisphere). Click to embiggen.

Comet C/2013 X1 (PANSTARRS) is now high enough above the horizon murk to be readily visible before twilight.  It is currently around magnitude 7, bright enough to be seen readily in strong binoculars (the latest sighting was in 11x70mm Binoculars, but 10x50's should work as well). Over the weeks it will brighten possible to magnitude 6, where it will be (just) visible to the unaided eye under dark skies.

Comet C/2013 X1 is showing a nice double tail reminiscent of C/2013 US10 Catalina in deep telescopic imaging, but with visual observation is is more like a ball of cotton wool. It is at a suitable height from around 4 am to astronomical twilight. 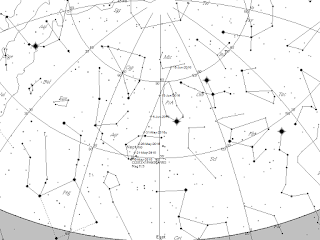 Printable black and white map of the eastern morning sky showing the track of comet C/2013 X1 over the coming month. Click to embiggen and print

The comet is in Aquarius, and is close to a number of distinctive stars which makes it easy to star hop to for most of May.

Directly above the eastern horizon is the reasonably bright star Fomalhaut. With binoculars, sweep down diagonally to the north around four binocular fields until you reach the distinctive grouping of Phi and Psi Aquarii. Phi and the double star Psi Aquarii form a distinctive triangle. Over the next few days the comet will lie between these stars. 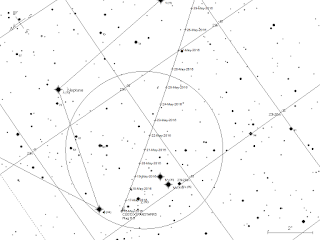 Black and white binocular chart suitable for printing,  showing a higher power view of the area around the comet. Use in conjunction with the spotters map above. The circle is the field of view of 10x50 binoculars. Click to embiggen and print.

Printable PDF maps of the spotters map, and the binocular map

Unfortunately, while the comet is brightening, the waxing Moon set later and later, by the 19th the Moon is setting when the comet is a good hight to view. The Moon is full on the 22nd, making it hard to see the comet. While the Moon wanes after this it comes closer to the comet, and on the 29th and 30th the last quarter Moon is just under two hand-spans from the comet, so it may be difficult to spot in the Moonlight. After this the comet should be readily visible again.

Comments:
While driving to the Blue Mountains from Sydney on Friday 13th May, we spotted what looked like a comet in the sky west of Sydney at about 3pm in the afternoon. Unfortunateley we weren't able to stop for a proper look. Might it have been this comet?