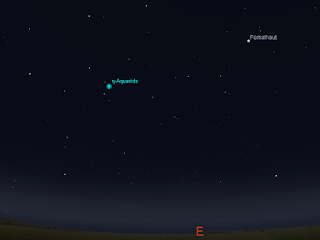 Morning sky on Saturday May 7 looking east as seen from Adelaide at 4:00 am ACST.  The radiant of the eta Aquariid meteor shower is shown.   Similar views will be seen elsewhere in Australia at the equivalent local time. (click to embiggen).

The eta Aquariids meteor shower, the debris from Halleys comet, will peak on May 5 UT , which translates to 6:00am AEST on May 6 in Australia.  However, the best rates will be seen from Australia on the mornings of the 7th and 8th.

This year conditions are near perfect for seeing the eta Aquariids, with the Moon a thin crescent or new.  People in the suburbs should see a meteor around once every 6 minutes, and in the country about once every 3 minutes. The radiant of the shower is about five hand-spans up from the eastern horizon, and three hand-spans to the left of due east at 4 am (see spotter chart at 4 am above).

You may have read that this year the eta Aquariids have a predicted ZHR of 40 meteors. The figure ZHR is zenithal hourly rate. This is the number of meteors that a single observer would see per hour if the shower's "point of origin", or radiant, were at the zenith and the sky were dark enough for 6.5-magnitude stars to be visible to the naked eye.

Although the actual peak is on 6th at 06:00 AEST, for Australia the best time to see the eta-Aquarids is in the early morning of the 7th, 8th and 9th. This year the thin crescent Moon will not interfere on the 6th, and the 7th is New Moon, so you should have almost ideal observing conditions if the cloud stays away.

How many will be seen on the 7th is not entirely clear (see prediction below, but they are only predictions), but good rates were seen in 2014, and dark sky sites may possibly see one meteor every three minutes or so. There were many bright ones reported with persistent trains in 2014. People in the suburbs may be will see less, but at least one every 6 minutes should be possible. Rates should be  much the same on the 8th and a bit less on the 9th.

The radiant of the shower is about five hand-spans up from the eastern horizon, and three hand-spans to the left of due east at 4 am (see above for a spotter chart at 5 am). When looking, be sure to let your eyes adjust for at least 5 minutes so your eyes can be properly adapted to the dark. Don't look directly at the radiant site, because the meteors will often start their "burn" some distance from it, but around a handspan up or to the side. The best way to watch the Eta Aquariids is to let your eye rove around the entire patch of the sky above the north-east horizon, between the only two obvious bright stars in the north-east, Altair and Fomalhaut.

Be patient, although you should see an average of a meteor every six to three minutes, a whole stretch of time can go by without a meteor, then a whole bunch turn up one after the other. 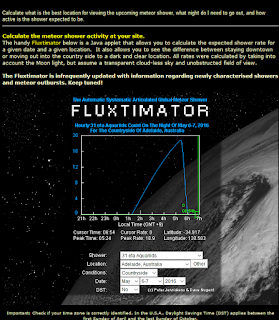 You need to choose 31 Eta Aquariids and remember to set the date to 6-7, 7-8 or 8-9 May 2016 and turn off daylight saving time. You can follow the progress of the shower at the IMO live Aquariid site.