The Sky This Week - Thursday March 31 to Thursday April 7

The Last Quarter Moon is Friday April 1 and the New Moon is Thursday April 7. Jupiter is  is visible all night long and has some nice Moon events. Venus is low above the horizon in the twilight. The crescent Moon visits Venus on April 6. Saturn is close to the red star Antares and forms a triangle with Mars which is in on the head of the Scorpion.

The Last Quarter Moon is Friday April 1 and the New Moon is Thursday April 7. 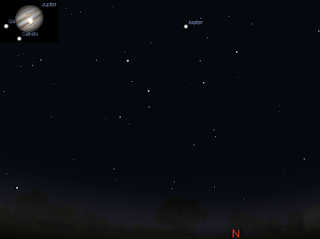 Evening sky on Sunday April 3 looking north as seen from Adelaide at 23:00 ACST. The inset is the telescopic view of Jupiter at this time, showing Io, Europa and Ganymede. Similar views will be seen elsewhere in Australia at the equivalent local time. (click to embiggen).

Jupiter enters the evening sky as the sun sets, and is  good for telescopic observation from around 21:00 on. Jupiter's Moons will be an excellent sight late in the evening. On April Io and its shadow cross the face of Jupiter from around 22:00 AEST, while Ganymede goes behind Jupiter. Callisto's shadow transits later.

The evening is also graced by the summer constellations of Taurus (with the V shaped cluster the Hyades forming the head of Taurus the Bull and the beautiful Pleiades cluster nearby), Orion the Hunter and Canis Major with bright Sirius, the dog star, above the western horizon at the beginning of evening. 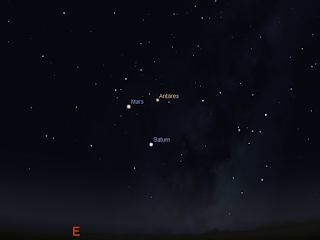 Evening sky on Saturday April 2 looking east as seen from Adelaide at 23:55 ACDST. Mars Saturn and Antares for a triangle. Similar views will be seen elsewhere in Australia at the equivalent local time. (click to embiggen).

Mars starts the week below a triangle of stars formed by Grafias, the double star omega Scorpii and nu Scoprii. It then moves further down the body of the Scorpion. Mars also forms a triangle with Saturn and the red star Antares. 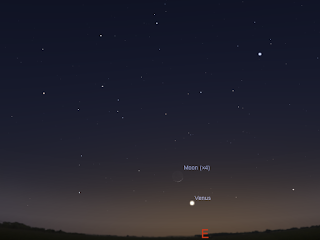 Early morning sky on  Wednesday April 6 looking east as seen from Adelaide at 5:45 am ACST showing Venus and the crescent Moon.  Similar views will be seen elsewhere in Australia at the equivalent local time. (click to embiggen).

Venus is becoming harder to see as it sinks in the  morning twilight. It is a  distinct "gibbous Moon" shape and is nice in a small telescope.It is visited by the crescent Moon on the 6th.

The Moons of Jupiter travel pretty much in the same plane BUT that plane is slightly tilted with respect to Earth's orbit. Callisto and ganymede are furthest from Jupiter, and so wnen passing (or about to pass) in front or behind of Jupiter will appear to be away from the plane of the other Moons (when thay are all strung out at furthest from Jupiter they look more in line)

Thanks for the explanation Ian. I should have realised it would be something like that.