The First Quarter Moon is Saturday May 14. Jupiter is visible all evening long. Venus is lost in the twilight. Saturn is close to the red star Antares and forms a triangle with Mars. Mars is in retrograde motion and enters the head of the Scorpion this week.

The First Quarter Moon is Saturday May 14. The Moon is at apogee, when it is furthest from the Earth, on the 19th. 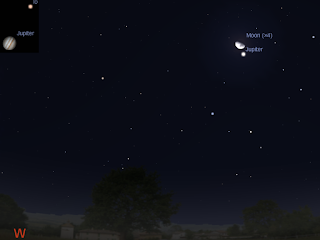 Evening sky on Sunday May 15 looking north as seen from Adelaide at 22:00 ACST. The inset is the telescopic view of Jupiter at this time. Similar views will be seen elsewhere in Australia at the equivalent local time. (click to embiggen). 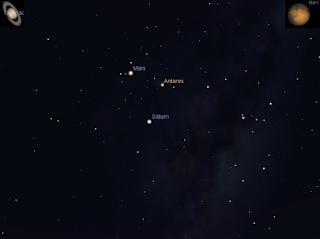 Evening sky on Saturday May 14 looking east as seen from Adelaide at 22:00 ACST. Mars, Saturn and Antares form a triangle. The inset shows telescopic views of Mars and Saturn. Similar views will be seen elsewhere in Australia at the equivalent local time. (click to embiggen).

Mars starts the week not far from the star Acab in Scorpio. Acab is one of three stars that defines the head of the Scorpion. Mars forms a triangle with Saturn and the red star Antares. By the end of the week Mars is in the very head of the Scorpion between the stars Dschubba and Acab.

Saturn is reasonably high in the evening sky and is readily visible below Scorpius. Saturn forms a triangle with Mars and the red star Antares. It is now high enough for good telescopic observation in the evening