The New Moon is Saturday May 7. Jupiter is visible all evening long. Venus is low above the horizon in the twilight and is close to the crescent Moon on the 6th. Saturn is close to the red star Antares and forms a triangle with Mars. Mars is in retrograde motion and is within binocular distance of the faint globular cluster M80. The Eta Aquariid meteor shower peaks May 7-8.

The New Moon is Saturday May 7. The Moon is at perigee, when it is closest to the Earth, on the 6th.

Evening sky on Saturday May 7 looking north as seen from Adelaide at 18:30 ACST. The inset is the telescopic view of Jupiter at this time Showing the shadow transit of Europa. Similar views will be seen elsewhere in Australia at the equivalent local time. (click to embiggen).

Jupiter enters the evening sky as the sun sets, and is  good for telescopic observation from around 19:00 on. Jupiter's Moons will be an excellent sight all evening. On the 7th Europa and its shadow cross Jupiter's face. 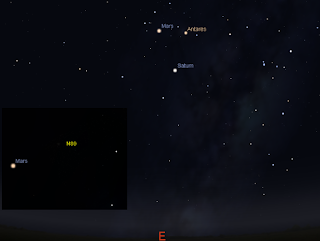 Evening sky on Saturday May 7 looking east as seen from Adelaide at 22:00 ACST. Mars, Saturn and Antares form a triangle. Mars is close to the dim globular cluster M80. Similar views will be seen elsewhere in Australia at the equivalent local time. (click to embiggen).

Mars starts the week next to the bright red star Antares in Scorpio. Mars forms a triangle with Saturn and the red star Antares. Between the 3rd and 12th of May Mars is within a binocular field of the dim globular cluster M80, being closest on the 7th.The brightness of Mars may make seeing the cluster a bit difficult though. 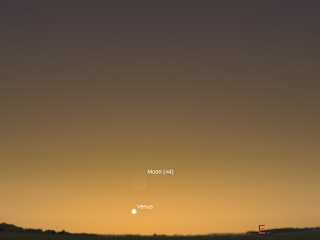 Early morning sky on  Friday May 6 looking east as seen from Adelaide at 6:30 am ACST showing Venus low in the twilight with the thin crescent Moon just above.  Similar views will be seen elsewhere in Australia at the equivalent local time. (click to embiggen).

Venus is becoming harder to see as it sinks in the  morning twilight. It is visited by the thin crescent Moon on the 6th, and is essentially lost to view after this. 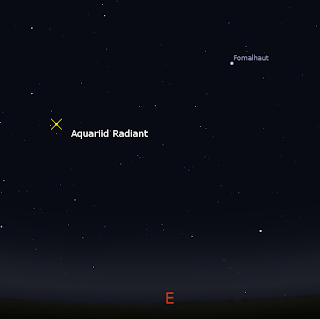 Morning sky on Saturday May 7 looking east as seen from Adelaide at 4:00 am ACST.  The radiant of the eta Aquariid meteor shower is shown.   Similar views will be seen throughout Australia at equivalent local times. (click to embiggen).

The eta Aquariids meteor shower, the debris from Halleys comet, will peak on May 6 UT . However, the best rates will be seen from Australia on the mornings of the 7th  and 8th with around one meteor every 3 minutes at dark sky sites. More details and viewing hints are at my eta Aquariid post.