Southern Skywatch May, 2016 edition is now out! 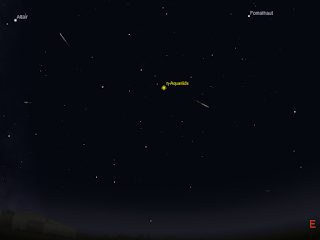 Morning sky on Saturday May 7 looking east as seen from Adelaide at 4:00 am ACST.  The radiant of the eta Aquariid meteor shower is shown.   Similar views will be seen throughout Australia at equivalent local times. (click to embiggen).

The May edition of Southern Skywatch is  up.

Mars comes close to the faint globular cluster M80 and on the 22nd, the night of opposition, the Moon, Mars, Antares and Saturn form a diamond in the sky.

Saturn has a close encounters with the Moon.

Venus is low in the morning twilight and is close to the crescent Moon on the 6th. Venus disappears in the twilight after this.

Mercury, enters the morning sky late in the month