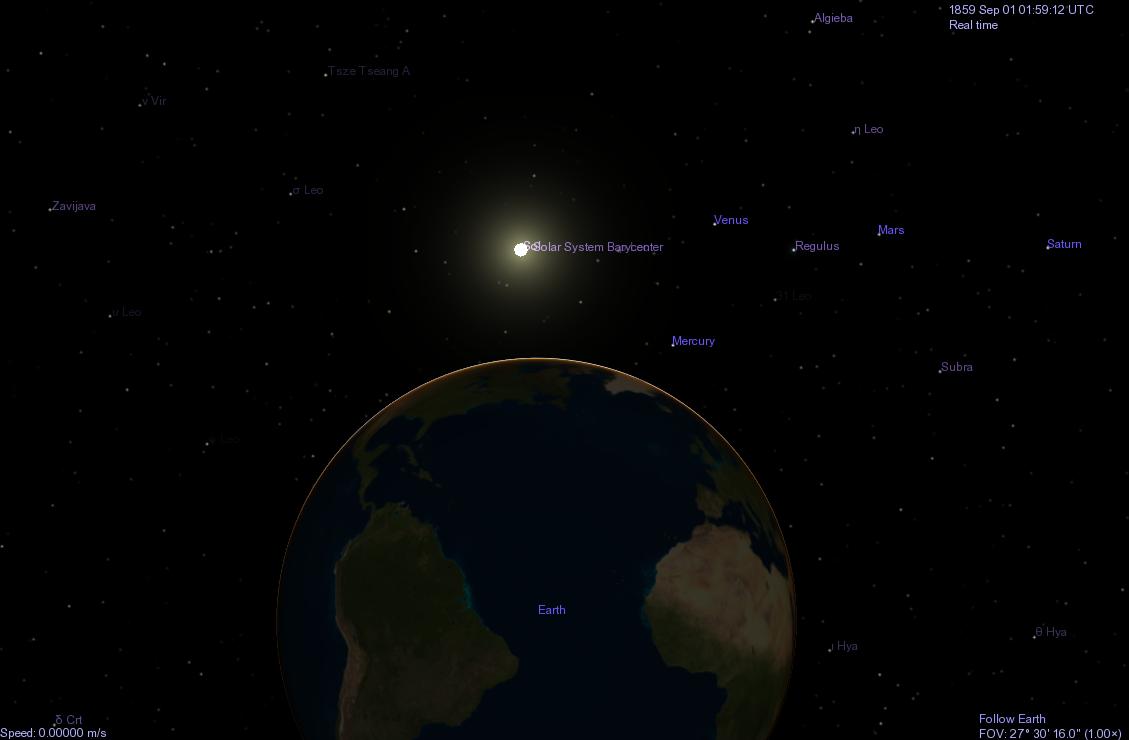 Planets as seen at the time of the Carrington Event, this is not much of an alignment (simulated in Celestia, click to embiggen)

Again, people apparently think that because planets are large, they will have significant gravitational/tidal effects that might affect the Sun, but as we have previously seen,  these effects fall off rapidly with distance, with Venus having less than a millionth of the tidal force of the Moon, for example.

The problem is that, during a solar maximum, there are a lot of flares. There are also a lot of alignments (depending on how you define alignment, well get to that later). By chance alone you would expect to see flares and alignments overlap occasionally. 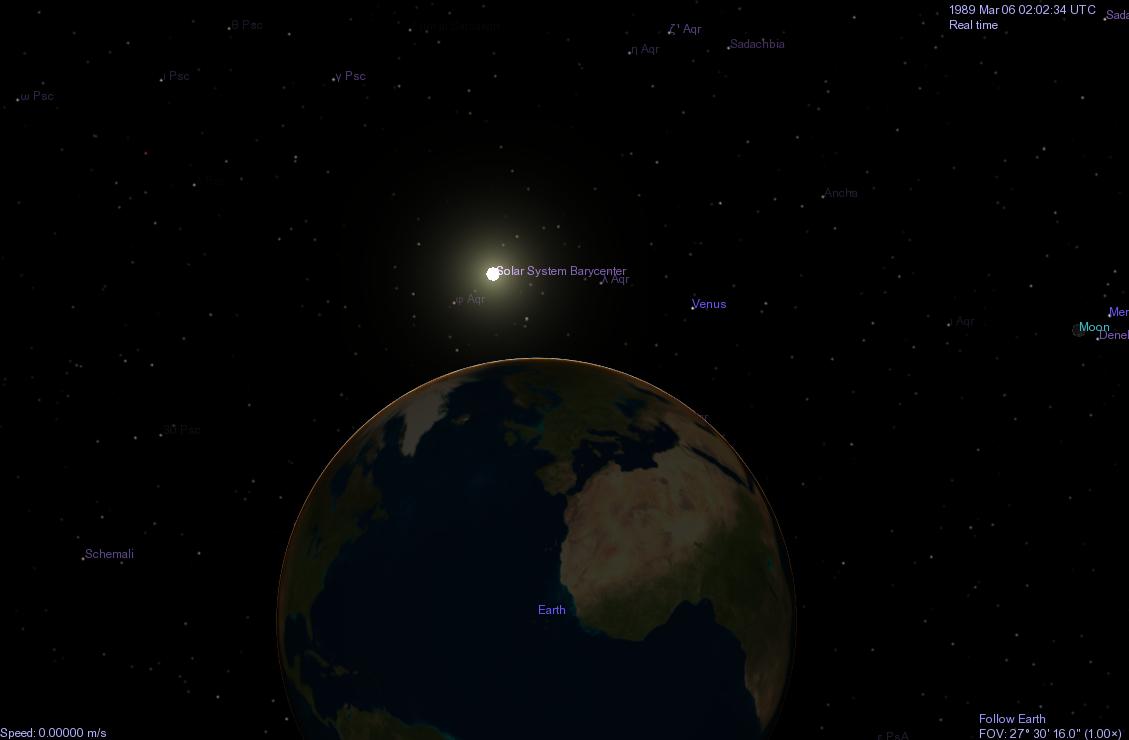 Planets as seen at the time of the1989 Event, which blacked out much of Canada. No alignment (simulated in Celestia, click to embiggen)

How frequent are flares? Well, it depends on the size of the flare and the time. The rarest and most powerful events are the X-class flares (the Carrington Event was a super X flare), and we have the most of these during solar maximum.

According to this document, there is an average of one X-class flare a month during solar maximum (which would mean that alignments and flares would pretty well occur often by chance alone). M and C class flares are even more common, the amount of data makes it hard to work with.

Of course, the flares are not evenly distributed, with far more occurring during the peak years than the start years.

I've approached the issue of alignments and flares in two ways.
This brings us to what constitutes an "alignment". In astronomical terms two or more objects are considered aligned if they are within 5º of each other. 5º represents the width of the top of your hand as seen when held out at arms length, or 10 times the width of the Moon as seen in the sky. 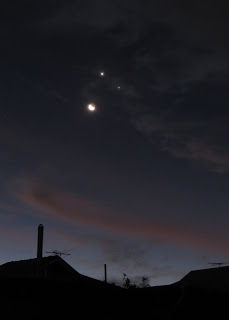 The "alignment" at the time of the Carrington Event had Mercury, Venus, Mars and Saturn strung out in a line that covered 12º, with Venus 7 º from the Sun. This is pretty marginal as alignments go.

But these are isolated examples, to get an unbiased picture of what is going on, we need to look at statistically valid samples of flares and alignments.

Which brings us back to what an alignment is.

For the purposes of this exercise, for a single planet to be aligned with the Sun, it has to be within 5º of it. For multiple planets, I've allowed that two planets must be within at last 10º of each other and at least one member of the group within 15º of the Sun.

So with those definitions, what does the flare/alignment profile look like.

Table 1. The most powerful X class flares since 1976 and their association with alignments. Alignments found using the events tool in SkyMap. Alignments defined as described above. 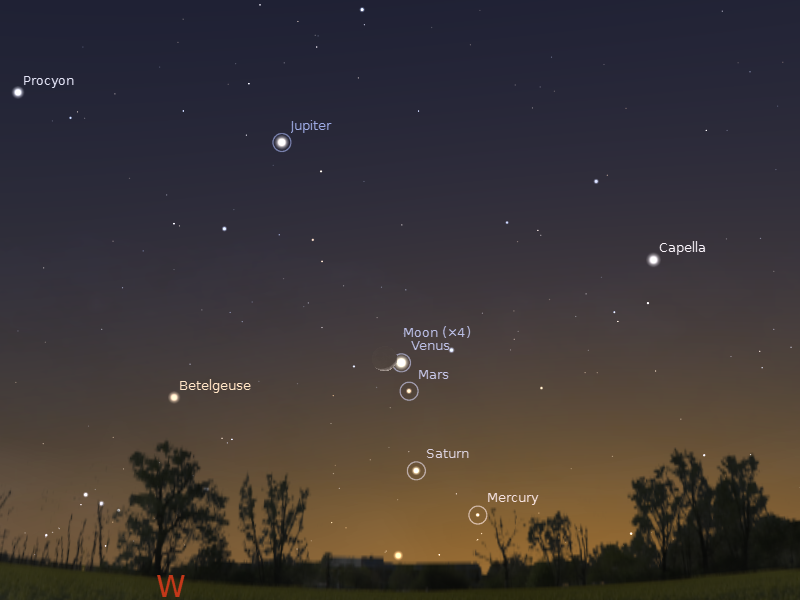 A Carrington Event style alignment on 15 May 2002. No flares occurred at this time (click to embiggen).

As you can see, there were no alignments during the most powerful X-class flare recorded since 1976, and neither was there an alignment during the 1989 flare that blacked out Canada. Mercury comes close to the Sun (in the absence of other planets nearby) during a few flares, but as Mercury comes close to the Sun often that is expected by chance alone.

So far not looking good for alignments and flares.

So lets look at alignments during the 2001-2003 peak of the last solar maximum.

Table 2. Planetary alignments during the last solar Maximum (2001-2003) and their association with X class flares. These are the dates when Venus and the Moon were aligned (minimum separation distance of 5º between Venus and the Moon, and maximum distance of 15º from the Sun). Other planets identified as being within either 5º of Venus or the Moon. Alignments identified using the events tool in SkyMap. Flare list from NASA, a flare occurring in the same month as any alignment was counted as positive.


Again, not looking good for flares and alignments. While there were other occasions when planets were close together they all occur too far away from the Sun (>20º) to be meaningful in the solar flare context. Also, in quiet years alignments go on quite happily, without any flares (I leave this as an exercise for the reader).

Everything we have seen is entirely consistent with chance association with flares and alignments.

The video does give some predictions, but they are very fuzzy "may result in exaggerated solar activity" this could mean anything from mere M class flares to high rating X class flares. Certainly The two X class flares we have had since July (13 July X1.4 and 23 October X1.6), were not predicted. The predicted dates of August 22 and September 21 (and the days either side) are devoid of flare activity greater than C8. October 3 and October 14 (and the days either side) miss out on anything and October 21 has an M class flare.

Hardly an encouraging hit rate, given that since July we have had roughly a C8 or larger flare roughly every 4 days. You could do better by flipping a coin.

Comments:
Good article, many are unfortunately of the mind that the alignments are where the worry should be (if any at all) when the reality remains that our greatest ally is or will be at one point again, our greatest enemy. The Sun will produce more flares until the next super solar flare which will probably come around the peak of our current solar maximum (2014-2015) especially if my calculations are correct with that being the time of arrival for our second (brown dwarf) star, the EM coupling alone explains a great deal of solar activity today.