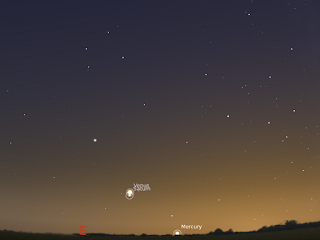 
The Full Moon is Thursday November 29.


Bright white Venus is now low above the eastern horizon, but is still not too difficult to see.

Venus is in the constellation of Virgo.  Venus is relatively low to the horizon, but still clearly visible in twlight skies. It will become harder to see over the coming weeks.

Venus will still be bright, but hard to see from cluttered horizons. Venus looks like a waxing Moon when seen through even a small telescope.

Saturn is now visible above the horizon before dawn. Saturn rises towards Venus during the week with the pair closest on the 27th.

Mercury returns to the morning sky, but is difficult to see in the twilight. Evening sky looking west as seen from Adelaide at 9:00 pm local daylight time on Saturday November 24. Mars is in Sagittarius near the globular cluster M28. Similar views will be seen elsewhere at the equivalent local time.  Click to embiggen.

Jupiter is still seen above the north-western horizon in the early morning sky. Jupiter is below the Hyades, between the red star Aldebaran and the dimmer blue white star Elnath, although closer to Aldebaran. Jupiter moves slowly towards Aldebaran during the week, making it look as if the Bull has two eyes.

Jupiter is now seen in the late evening sky, rising around 9:00 pm local daylight saving time and is moderately high by midnight. It is now a reasonable telescopic object in the evening. Jupiters' Moons are easily seen in binoculars, and can be follwed from night to night changing position.