The First Quarter Moon is Wednesday November 21. Mars is in Sagittarius in binocular distance of  some beautiful clusters. Mercury is no longer visible.  Jupiter is visible in the late evening sky. In the morning skies Venus is low on the horizon.  Saturn is now visible low in the morning sky and comes closer to venus. Leonid meteor shower 17-18 November. 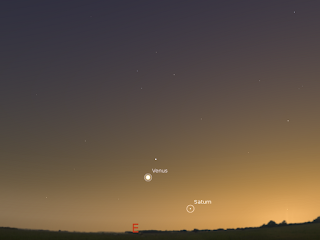 Morning sky on Sunday November 18 looking east as seen from Adelaide at 5:30 am local daylight saving time in South Australia. Saturn ius rising in the dawn sky and is coming close to Venus. Similar views will be seen elsewhere at the equivalent local time (click to embiggen).


Jupiter is still seen above the north-western horizon in the early morning sky. Jupiter is below the Hyades, between the red star Aldebaran and the dimmer blue white star Elnath. Jupiter moves slowly towards Aldebaran during the week.

Jupiter is now seen in the late evening sky, rising shortly before 9:30 pm local daylight saving time and is moderately high by midnight.

Bright white Venus is now low above the eastern horizon, but is still not too difficult to see. It continues sinking lower over the week. Venus looks like a waxing Moon when seen through even a small telescope.

Venus is in the constellation of Virgo.  Venus is now relatively low to the horizon, but still clearly visible in twlight skies. It will become harder to see over the coming weeks. Venus will still be bright, but hard to see from cluttered horizons.

Saturn is now visible above the horizon before dawn, but will be difficult to see until the end of the week. Saturn rises towards Venus during the week. 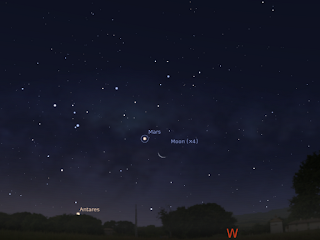 Evening sky looking west as seen from Adelaide at 9:00 pm local daylight time on Friday November 16. Mars is in Sagittarius with the crescent Moon nearby. Similar views will be seen elsewhere at the equivalent local time.  Click to embiggen.

Mercury is now lost in the twilight.

Mars is in the constellation Ophiuchus, but enters Sagittarius by the end of the week. Mars is second brightest object in the western sky (after  the red star Antares, which is just a little brighter than Mars). Mars's distinctive red colour makes it relatively easy to spot.

Mars will be in binocular range of several beautiful clusters for most of the month. The crescent Moon visits Mars on the 16th.


The Leonid meteor shower peaks on the17th, but is best seen on the morning of the 18th. Unfortunately, there will be very few meteors this year, less than one every 10 minutes.