The New Moon is Wednesday November 14, at this time a total eclipse is seen in North Queensland and a partial eclipse elsewhere in Australia. Mars is in Ophiuchus in binocular distance of  some beautiful clusters. Mercury heads into the twilight  in the western evening sky.  Jupiter is visible in the late evening sky and is visited. In the morning skies Venus is low on the horizon. The crescent Moon is close to Venus on 11 and 12 November.

The New Moon is Wednesday November 14. On November 14 2012, just on Sunrise, there will be a total eclipse of the Sun visible from Northern Australia.

A partial eclipse of the sun is one that does not cover the whole of the Sun's disk.
This is not as spectacular as a full solar eclipse, but will be incredible in it's own way. For example, in areas where there is greater than 60% solar disk coverage, there will be significant darkening and cooling, and the shadows of leaves will show crescent sun effects. This is also the first significant solar eclipse in Australia since 2002.

I have a detailed page on viewing the eclipse, with times at various locations, viewing hints and helpful  links to more information (such as how to build a safe projections system) and webcams at http://home.mira.net/~reynella/skywatch/ECL_2012.HTM 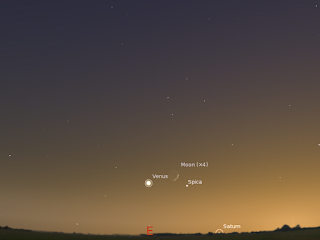 Morning sky on Monday November 12 looking east as seen from Adelaide at 5:30 am local daylight saving time in South Australia. The nearly Crescent Moon is close to Venus. Similar views will be seen elsewhere at the equivalent local time (click to embiggen).

Jupiter is still easily seen above the north-western horizon in the early morning sky. Jupiter is below the Hyades, between the red star Aldebaran and the dimmer blue white star Elnath. Jupiter moves slowly towards Aldebaran during the week.

Jupiter is now seen in the late evening sky, rising shortly before 10 pm local daylight saving time and is moderately high by midnight. Still not quite high enough for telescopic viewing though. .

Venus is in the constellation of Virgo.  It continues to approach the bright star Spica, alpha Virginis. Venus is now relatively low to the horizon, but still clearly visible in twlight skies. It will become harder to see over the coming weeks. Venus will still be bright, but hard to see from cluttered horizons. The thin crescent Moon is close to Venus on 11 and 12 November. 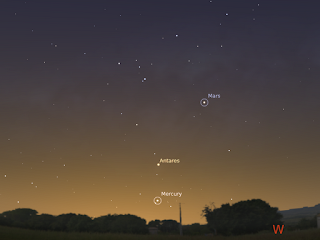 Evening sky looking west as seen from Adelaide at 8:30 pm local daylight time on Saturday November 10. Mercury is in the head of the Scorpion. Mars is in Ophichusus. Similar views will be seen elsewhere at the equivalent local time.  Click to embiggen.

Mercury is no longer rising in the sky, and is now becoming dimmer. It is still the brightest object just above the western horizon towards the end of twilight, just above delta Scorpii in the head of the Scorpion. It will become harder to see as the week progresses.

Mars is in the constellation Ophiuchus, but enters Sagittarius by the end of the week. Mars is third brightest object in the western sky (after Mercury and the red star Antares, which is just a little brighter than Mars). Mars's distinctive red colour makes it relatively easy to spot. Mars will be in binocular range of several beautiful clusters for most of the month.