Will the Alignments of November 28 Cause Earthquakes? (No, but you knew that) 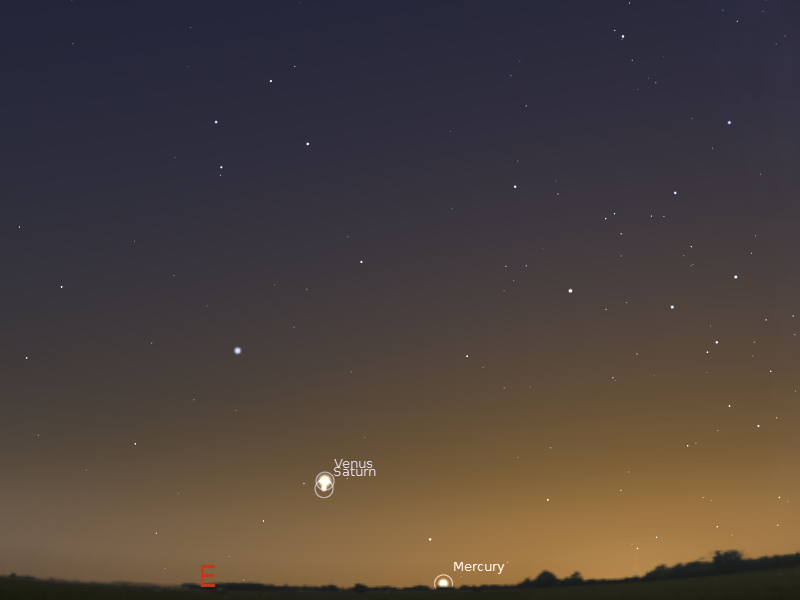 
On November 28 there will be a penumbral eclipse of the Moon. At this time Mars will be "close" to Pluto (over 4 degrees, the width of 4 fingers when you arm is outstretched, or 10 lunar diameters away from each other) and Venus and Saturn will be a much more impressive half a degree away (although that is in daylight on the 27th).

The Saturn-Venus alignments will be attractive (but difficult to see in the twilight), while Mars-Pluto will be invisible to all but serious telescopes (although Mars will be very close to the attractive globular cluster M22, a worthwhile binocular or small telescope sight). 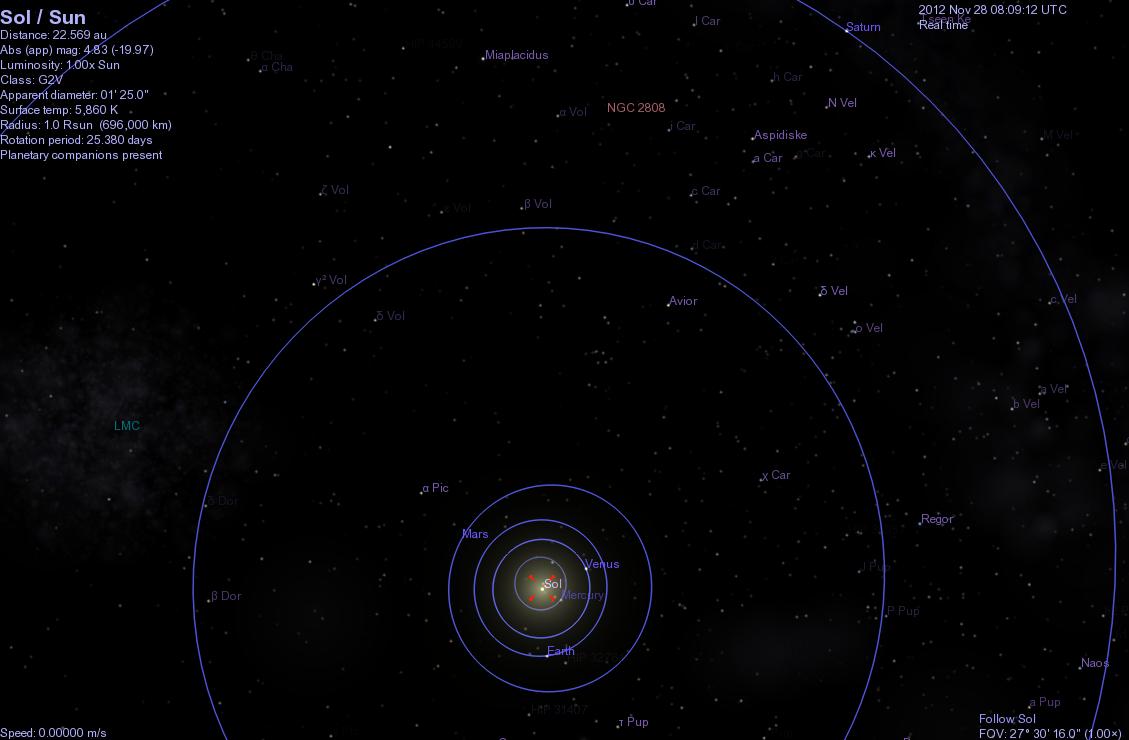 Inner Solar system on November 28 (Pluto is too far away to fit in, click to embiggen).

And wouldn't you know, someone is claiming that these alignments will cause a magnitude 7.8 or so earthquake.

Yeah, alignments, I'm not sure why people seem to think planetary alignments are causing earthquakes. Maybe because planets are big and there's this gravity thing and uuumm, they're ALIGNMENTS man!
And there is the tide.

Now, the Moon raises not only tides in the ocean, but also tides in the crust of the Earth. Small to be sure, around 30 cm. However, you can imagine that the flexing of the Earth as the lithosphere tide passes through the Earth might set off an earthquake that was already “ready to blow” as it were. Indeed, there is a weak correlation between the lithospheric tides associated with Full/New Moon and a subclass of shallow earthquakes (increasing the probability of this subclass of earthquakes by less than 1%).

So if the Moon raises a tide, why can't the planets? And why can not the sum of the planets tidal force be big enough during an alignment to have an effect.


"Space is big. You just won't believe how vastly, hugely, mind-bogglingly big it is. I mean, you may think it's a long way down the road to the chemist's, but that's just peanuts to space."

Sure planets are big, but space is bigger. Gravity holds it all together, but gravitational tidal force falls off rapidly with distance (as the cube of the distance, this is what we call "a lot" in technical terms) . 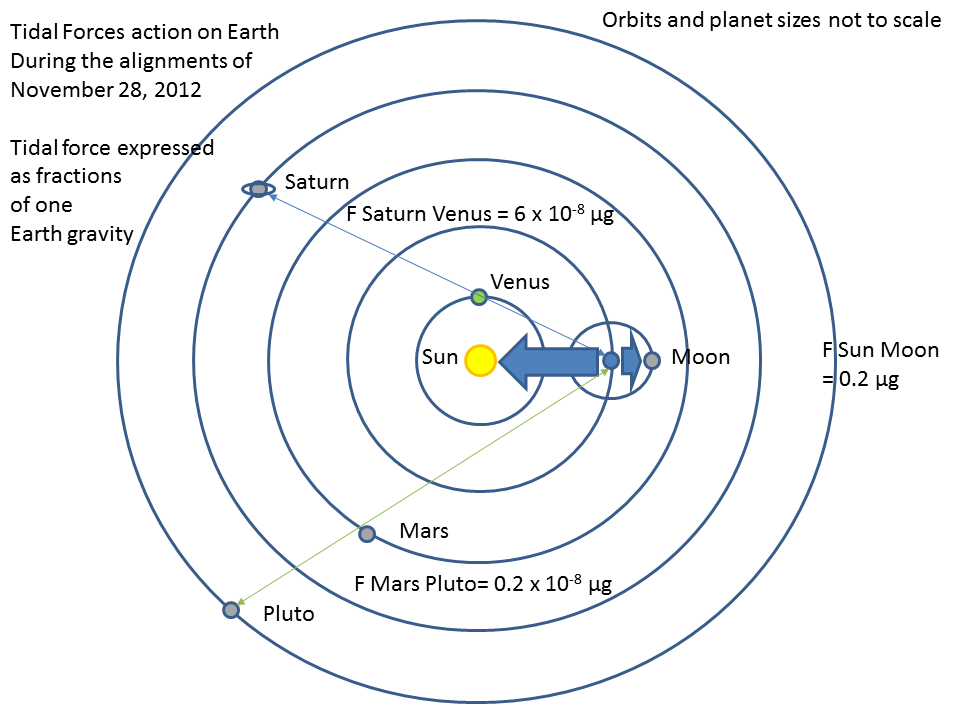 Tidal forces acting on Earth on November 28. Planetary orbits and planet sizes not to scale (otherwise they wouldn't fit on the image, click to embiggen).

Now, ever since this bloke called Newton got gravities measure we can actually do the calculations to work out what the tidal force between the various planets and Earth is.

There are a number of versions of the tidal force equations, and I've used a couple of them, they give much the same answers.

However, the respective Mars-Pluto and Saturn-Venus alignments are around 30 degrees from the Moon-Sun axis (see the figure above).

If you remember your tides, tidal heights are lower when the Moon and Sun are not directly aligned, so if anything, the tidal hight of ocean and earth tides will be LOWER and the risk of earthquakes less due to the Mars-Pluto, Saturn-Venus alignments.

So when I calculated the tidal forces I used a version of the equations that take the angles into account.

Tidal Force = 3/2 x GmM x (r/R3) x sin 2Theta, where G is the gravitational constant, m is the mass of earth, M is the mass of the tidally interacting body, r is the radius of Earth, R is the separation between earth and the the object and Theta is than angle between the object and the Earth-Sun axis.  The spreadsheet is here so you can do your own calculations.

This is 106 times smaller than the variation in gravitational force due to variations in the Moons orbit (which, as we know, has virtually no effect on earthquakes). You can check this yourself via the spreadsheet.

So tremble in fear, not.

David Greg has a series of videos on the various problems with prediction earthquakes from alignments (and why these predictions fail), see here and especially here.

Comments:
I cannot believe that someone can post a video using all of the benefits provided by engineering technology based on scientific study - and they claim they can predict earthquakes based on ASTROLOGY !!!!!
I mean seriously.

Jup, I am no longer surprised by what technologically savvy people believe. Ask me about homeopathy some time :-)