The Sky This Week - Thursday May 26 to Thursday June 2

The Last Quarter Moon is Sunday May 29. 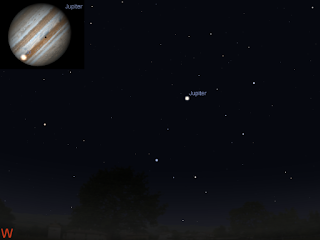 Evening sky on Saturday May 28 looking west as seen from Adelaide at 22:00 ACST. The inset is the telescopic view of Jupiter at 20:00 ACST. Similar views will be seen elsewhere in Australia at the equivalent local time. (click to embiggen).

Jupiter is high in the evening sky as the sun sets, and is  good for telescopic observation from around 18:00 on. Jupiter's Moons will be an excellent sight all evening. On the 28st Io crosses Jupiter's face around 19:00, then its shadow follows from around 20:00.. 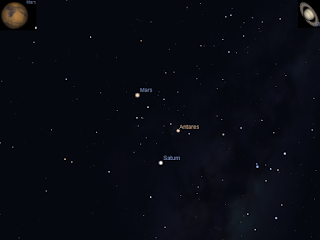 Evening sky on Saturday May 28 looking east as seen from Adelaide at 22:00 ACST. Mars, Saturn and Antares form a triangle. The inset shows telescopic views of Mars and Saturn. Similar views will be seen elsewhere in Australia at the equivalent local time. (click to embiggen).

Mars starts the week in the headin front of the star Dschubba and foring a line with Dschubba and Anatres.  As well Mars forms a triangle with Saturn and the red star Antares. Mars was at opposition on May 22, but Mars will be big and bright for all this week. It is visible all night long. In even small telescopes Mars will be a visible disk, and you should see its markings.

Saturn is reasonably high in the evening sky and is readily visible below Scorpius. Saturn forms a triangle with Mars and the red star Antares. It is now high enough for good telescopic observation in the evening. 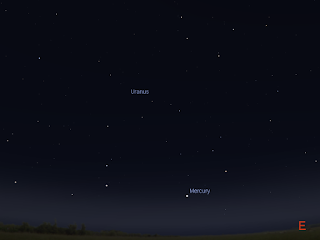 Morning sky at 6:00 ACST facing east as seen from Adelaide.Similar views will be seen elsewhere in Australia at the equivalent local time. (click to embiggen).

Mercury climbs higher in the morning sky, but is still low to the horizon.

Comet C/2013 X1 (PANSTARRS) is now high enough above the horizon murk in the morning sky to be readily visible before twilight. It is currently around magnitude 7. A guide to seeing it is here.

I am starting up an AstroPhiz Podcast. The focus is on astrophysics and radio astronomy and each week I would like to include a segment on backyard/optical astronomy and present info on 'what's up this week'.

A. I realise you already have many commitments but I'd love to have you as a regular presenter on the show to tell us about current astronomical phenomena as featured on your Astroblogger site. The advantage of this is that it would not require any additional work on your part. Would you like to do this?

B. If you are not in a position to talk for about 10mins/week on Skype, could I have your permission to read out relevant stories from your blog?
Attribution will be given in each show, and links to your blog in the shownotes on my Astrophiz Blog.

I'm planning on recording/publishing the first episode over the next 3 weeks, so if you are available to lend your dulcet tones to the show, we would need to have a recorded Skype or phone conversation at a time of your choosing in the near future.


PS I tried emailing your reynella@mira.net address but it bounced back