On August 14 a magnitude 7.7 earthquake occurred of the coast of Japan. A prediction had been posted that the planetary alignment of August 14 would produce significant earthquakes. Did the Japan earthquake fulfil the prediction? 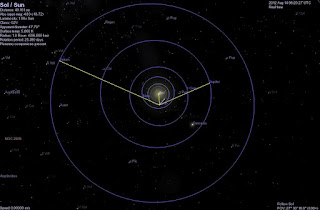 This, allegedly, is an earthquake producing alignment, despite everything being all over the place. The Venus Moon alignment is at a significant angle to the Earth-Sun axis. Jupiter is way off (click to embiggen).

To explain why, we need to briefly consider statistics. In any given year there are, on average 26338 earthquakes, and 16 of these are magnitude 7 and above. In general, earthquakes occur at random [1], so what is the probability that a 7+ earthquake would occur on the date of the alignment by chance alone?

The probability that a 7+ earthquake will occur on any specified day in a year is 1/24. This is hardly wildly improbable, and it is plausible this alignment and the quake are coincident by chance alone.

But in fact the probability the August 14 event is by chance alone is much more likely, because you need to consider all alignments in a given 365 day span.

If we take "alignment" to mean when a minimum of two planetary bodies are within 5 degrees of each other, or 5 degrees from directly opposite each other (like full Moons/new Moons and the Sun), then in the 365 day period since 14 August 2011, there were 53 alignments of the bright planets Venus, Mars, Jupiter, Saturn and the Moon [2]. Thus, by chance alone we should see two planetary alignments occurring on the same day as a 7+ magnitude earthquake in this time period. 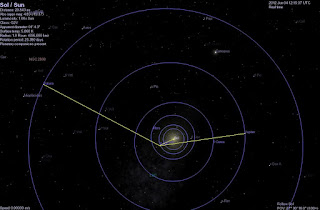 June 4, 2 days before the transit of Venus. Full Moon lined up with Venus 3 degrees from the Sun, Mercury and Jupiter within 15 degrees of the Sun. Altogether a much more favourable line-up for earthquakes - yet nothing happened.

Particularly if we consider the alignments of 4 June, 18 June and 15 July. On 4 June, two days before the transit of Venus, The Sun and full Moon were aligned and Venus was within 3 degrees of the  Sun. Jupiter and Mercury were within 15 degrees of the Sun.

If we were going to see 7+ earthquakes this alignment should do it. But it didn't. The alignments of 18 June and 15 July were very similar to that of 13 August, but were devoid of 7+ quakes (indeed, June and July were the quietest months for earthquakes since 14 August 2011). The results are entirely consistent with chance.

Now let's consider plausibility. It is plausible that tidal forces could increase earthquakes, after all, the tidal force of the Moon causes the crust of the earth to flex by as much as 30 cm, it's possible this flexing could set off a quake that is close happening spontaneously.

However, earthquakes in general are not more common at the times of full or new Moon, when the tidal forces of the Sun and Moon are aligned and tides are at their highest.

Maybe the addition of extra planetary tidal forces could do the trick?

Tidal force drops off as the cube of the distance, the tidal force of Jupiter is 0.000033 that of the Moon. Also, for the effects to truly add up, the Sun, Moon and planets have to be precisely aligned.

The alignments favoured by the various websites around the 'net have alignments that are completely ineffective, being more than 25 degrees away from the Solar new/full Moon axis. Remember that the highest tides (of both water and the Earth's crust) occur at Full and New Moon, when the Sun and Moon are aligned, the lowest tides are at last quarter Moon, when the Moon is at 90 degrees to the Sun-Earth axis.

The following table  shows the tidal forces of the Sun, the Moon, and the planets compared to that of the Sun (set at 1).

Indeed, the Venus-Moon alignment of August 14  is opposed by the Mars-Saturn alignment. So we would expect a lower chance of a planet-induced earthquake (if not for the fact the tidal forces is so insanely tiny).

What about the idea that the planetary alignments are causing resonances, amplifying the lunar tidal effects? Mensur Omerbashich uses the metaphor of soldiers marching in lock-step, where the repeated simultaneous foot falls of the soldiers set up a bridge destroying resonance. However, in this case we have one soldier (the Moon), whose footfalls occur with a 14 day rthym, next to him a grass hopper (Jupiter) who jumps before the soldiers boot strikes the bridge, and an ant (Venus) who also jumps before the soldiers boot falls, but at a different time from the grasshopper. As well, the timing of the jumps of the grasshopper and ant changes from footfall to footfall, so there is no regular pattern to them.

The August 14 quake is exactly what we would expect from a earthquake and aligment occuring together by chance. This is re-enforced by the large number of alignments which fail to produce alignments, and a lack of a plausible mechanism for alignments to cause earthquakes.

Alignments are lovely to watch. But that is the sole extent of their influence of Earth.

[1] There are occasional earthquake clusters in an active zone, and aftershocks in a major earthquake, but for 7+ magnitude quakes they are close enough to being randomly distributed for our purposes.
[2] This is much more restrictive than the alignment earthquake predictors, who add in Mercury, Uranus and Neptune to the mix, regardless of their miniscule tidal effects, and separations of up to 15 degrees. Also, they tend to include the days either side of the alignment which increases the probability you will see alignment just by chance.
[3] I am well aware of the limitations of the metaphor, but the point is that you need some consistent peiodicity, and decent mass, for resonance systems to work. Planetary alignments just don't fit the bill.
[4] More information on earthquakes and astronomical phenomena here.