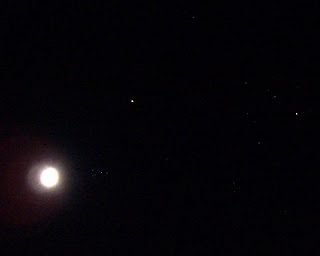 Wow, that was fantastic! Tuesday morning was cloud free for a change. When I got up, the sky was clear and sparkly with stars. Mars, the Moon and the Pleiades clustered together most attractively (see image to left, click to enlarge for more detail, Aldebaran and the Hyades are to the far right).

I set up the scope to have a look at the Moon and wait for the ISS. That is when my laptop died, just gave up the ghost. This is rather sad, I know I needed to replace my ageing laptop, but any new one won't be able to run my webcam camera, so astrophotography is out for a while. 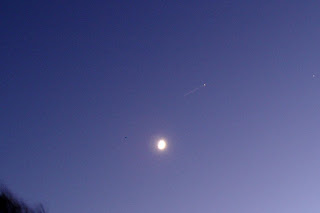 The sky lightened, the birds began their morning chorus, I could easily see Mars and Aldebaran, and Orion, but the Pleiades and Hyades were more difficult to see. Suddenly, a chip of light appeared above the horizon, the ISS! It moved slowly up the sky, and I started taking images. It glided above the Moon and then, it glided straight in front of Mars! That is a pretty rare sight (click on image to the left to enlarge).

Then on through the Hyades and up under Orion's belt! I made an animation (1.6 Mb gif file).

Aside from the demise of my beloved laptop, it was a pretty spectacular morning. I headed in for my morning cuppa a contented man. Peter from Marybrough saw Mars pass in front of the Moon, which was pretty cool too. How was your experience?

And a really nice fireball...
ISS, Mars, Moon and the Pleaides on Tuesday Mornin...
A Birthday Competition for Ice In Space
Moon, Mars and Pleiades in the Morning.
Fantastic Mobile Phone Photos
HIV vs Behe
The 14th Carnival of Space
August Southern Skywatch Now Up
Asteroids in STEREO, a problem in Paralax
The 13th Carnival of Space is now live