ISS, Mars, Moon and the Pleaides on Tuesday Morning 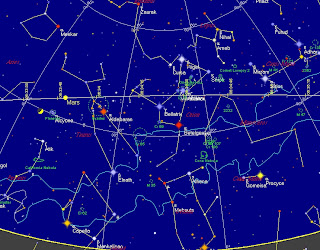 People in Adelaide and Brisbane (well South Australia and SE QLD generally) get a bonus on Tuesday morning, not only do they get to see Mars, the Moon and the Pleiades close together, the get to see the ISS glide past them.

Adelaide people have the best view, with the -1.0 magnitude (about as bright as Sirius) ISS appearing to almost touch Mars (see above diagram). The ISS will become visible in the North around 6:31 am, then passes the Moon at around 6:33:30, then nearly touches Mars at 6:33:45, then passes through the heart of the Hyades at 6:34 then passes underneath Orion's belt. A pretty amazing sight, although it will not 5 minutes from civil twilight, the brighter stars will be easily visible.

For people in Brisbane, the ISS becomes visible at magnitude -1.0 roughly North at 5:27 am local time. It will pass under the Moon and Pleiades at around 5:29 local time, then passes the Hyades at 5:30 am, finally passing through Orion at 5:30:30.

Sydney observers will see the ISS skim above the horizon between 5:30 and 5:32.

To check for ISS visibility, timings and get sky maps at your exact location, see http://www.heavens-above.com/

A Birthday Competition for Ice In Space
Moon, Mars and Pleiades in the Morning.
Fantastic Mobile Phone Photos
HIV vs Behe
The 14th Carnival of Space
August Southern Skywatch Now Up
Asteroids in STEREO, a problem in Paralax
The 13th Carnival of Space is now live
Comet 2006 VZ13 in STEREO
Slept through the occulatation