Asteroids in STEREO, a problem in Paralax 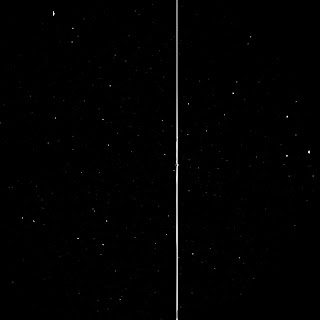 Over at Stereohunter, Comet Al challenged us to find a number of asteroids, including the asteroids 3 Juno, 23 Thalia and 11 Parthenope in the STEREO H2A images from 16-17 July.

So I'm up for a challenge. I downloaded the images, gussied them up and started searching.

At least part of the failure has to do with parallax, but before I get to that, I need to point out a couple of issues with the STEREO images.

First off, they are FTS images, so you need a image package that can handle FTS (like ImageJ or The GIMP). Then, in order to see the apparent motion of the asteroids against the star field, you need to stack them and animate them in some way. Assuming you can handle that, then comes your greatest challenge. Working out what the heck you are looking at. This is fairly easy when some bright and obvious constellation id the the field of view of the STEREO cameras, but not so easy when there is a fairly nondescript field. Click on the image above to enlarge it and try and work out what constellations are in view.

Once you have done that, scroll down and have a look at the annotated images below, with the equivalent SkyMap chart beside it (you should click on them to enlarge them for effective comparison). 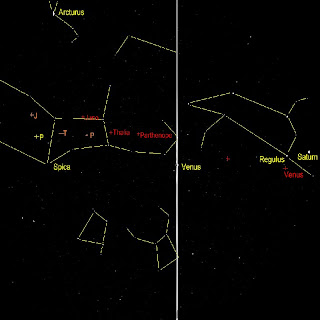 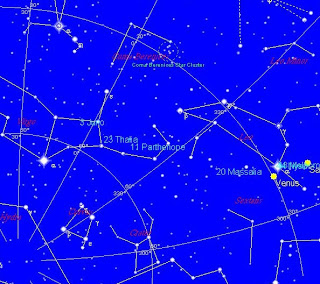 First off, the imaging system of the STEREO cameras isn't quite uniform across the field, so some stars seem to have different brightness to what you expect when compared to the chart. The chart is in RA/Dec mode as well, otherwise the chart orientation won't match the STEREO image orientation. You also need to play with the black/white balance a bit to enhance the brightness of the stars and make identification easier.

What threw me for a little while was that I couldn't find Spica. The STEREO camera has a wedge shaped section in its field of view where no images are formed (instrument shadow?), and Spica fell into this blank bit.

Now, once the locations of stars was sorted out, it was on to hunt asteroids. It was here the parallax problem came into play. People comparing the image to the chart will be immediately see that Venus is not where the chart says it should be, although Saturn is (more or less). Note Venus has enormous artefactual spikes due to the way the STEREO imaging camera is setup.

Anyway, Venus is displaced around 23 degrees from where the chart says it should be. This is because of the orbits of the STEREO spacecraft. STEREO A orbits ahead of the Earth, by around 23 degrees of solar longitude. Looking at the Sun from STEREO A, Venus is relatively close and shifted around 23 degrees against the background stars from our perspective, but Saturn is fairly far away on the other side of the Sun, and shifts very little (use the distance slider on the JAVA applet showing the STEREO orbits to get a feel for Saturn's and Venus's relative locations0.

The asteroids are somewhat in between, and will shift by a different amount. For example, comet VZ13 is shifted by around 10 degrees from its earth-centric chart position.

Now, if I was a math kinda guy, I could write an algorithm to compute the offset of any given asteroid and apply that to the images. But there is a reason I'm a biologist. I've been hunting for STEREO orbital elements, so that I can put them into Celestia, and view the sky from the satellite POV, but to no avail so far. So I did the next best thing, and did a manual approximation.

So I searched systematically in that area, at high magnification and greatest black and white adjustment (showing stars down to at least magnitude 12). I found a hot pixel (on the 20070716-080920 image, where 0.0 is the upper left hand corner, it is at 250,170), an internal reflection of Venus in the imaging system (422,479) and what may be part of a coronal ejection (884,409 815, 594), but no Juno, Thalia or Parthenope. They may be lost in the wedge, or obscured by brighter stars, or I may have got the offsets hopelessly wrong, but I just can't find them. If anyone has any ideas let me know (or STEREO satellite orbital elements!)

If anyone thinks hunting for comets in STEREO images is a doddle, just try the exercise of looking for named asteroids. To find a new comet you have to find a moving object in the images (not easy when it is faint amongst crowded stars), then sort it out from known asteroids at variable parallax offsets and a variety of artifacts. Now, if you want to be a STEREO comet hunter, you have to do this relentlessly, night after night, on stacks of dozens of images, in the hope of finding that faint something that is an unknown comet. STEREO comet hunting is far from a doddle.

Still it's a great challenge.

Comments:
Oh, so close , the charts look good, get some depth in the image by using the ImageJ square root math function after doing a Z project - min subraction on the images. Adjust the brightness and contrast then do the Register Roi. Look for Juno then hunt around. cheers, like the phone cam work very sharp. rgds CometAl

Thanks Again a brillant read.

The 13th Carnival of Space is now live
Comet 2006 VZ13 in STEREO
Slept through the occulatation
A nice night after all
Whats up tonight (and Tomorrow night)
The Zombie Mars Hoax That Will Not Die!
The Tripoli Six have been Freed!!!!!
Stupid Mobile Phone Tricks
Happy Birthday ABC Science Unit
12th Carnival of Space now available