The Perigee Moon ("Super Moon") of Monday December 4, What Can You See?

Due to travel to visit my mum and go to conferences, where I don't have access to my drawing programs, I have recycled an old post, so I don't have updated images. 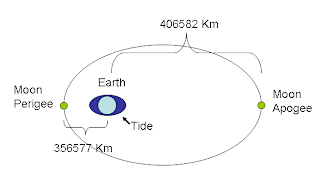 Illustration of the orbit of the Moon around the Earth. Distances for apogee and perigee are given for the 2011 Full Moons because I was lazy (and am traveling) and didn't want to redraw the diagram.

Technically,  the Moon will be at perigee, when it is closest to the Earth.

However, astronomical outreach groups started using the term "Super Moon" for perigee Moons and it stuck. 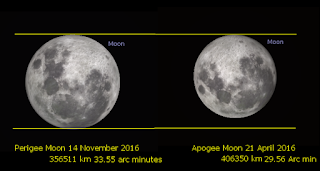 Chart comparing the binocular/telescopic appearance of the November 2016 Full Perigee Moon with the apogee Moon of  April 21 2016. This year's perigee Moon on December 4 will be slightly smaller than the November 14 one. Click to embiggen.

What can you expect to see with the "Super Moon" of  December 4?

The problem is, while the Moon is close this time around, it doesn't actually translate into something you can easily see with your unaided eye. Mondays Full Moon will be around 14% larger and 30% brighter than June's apogee Full Moon.

So how's your memory?

If you can remember back that far, and remember seeing the Full Moon on June 8, you now come up against the limits of human eyesight.

The limit of distances that someone with good vision can distinguish between is 1 minute of arc (about the width of a human hair). So, for the vast majority of people, any difference smaller than 1 minute of arc cannot be seen. The difference between the Apogee full Moon of 8 June (29'58") and this Mondays perigee "Super" full Moon (33'36") is around 3 minutes of arc, that is 3 human hair widths, doable for most people, but you do have to remember what the Moon looked like back in June, 8 months ago.

Some of my astronomical friends who are regular Moon viewers can do this. On the other hand, I have been trying to image perigee and apogee Moons for a couple of years, and I can never tell the difference.
That doesn't mean you shouldn't look though, Daniel Fischer has been able to see the difference, you can read his account and viewing tips here
http://earthsky.org/space/can-you-discern-supermoons-large-size-with-the-eye-an-observer-says-yes

However, it will be a good photo opportunity, if you have a decent zoom on your camera or access to a small telescope. If you have not already taken an image on June 8,  taking a photo of the Moon on December 4 (Or Jan 1 2018, which is a better Perigee Moon) and then again on  July 27 in 2018  for the apogee "mini-Moon" you will see a decent difference (you need to use exactly the same zoom enlargement, see Inconstant Moon for instructions).

Here's my images from the January/August 2014 apogee and perigee Moons respectively.

In contrast, the November 6th Full Moon, which you probably can remember,  was 32'45'' wide (compared to this months "Super Moon" of 33'36")  so the difference is less than one minute of arc, the Full Moon of October  5 was 32'11" wide, again around one minute of arc wide so you will not be able to tell the difference between these full Moons and this Monday's "Super Moon".

Recent perigee Full Moons compared to the close 2034 and 1948 perigee full Moons, note that there is only a handful of kilometres between them. (source)

Another twist is that the time of perigee is 08:43 UT, which is 19:43 AEDST, the Moon doesn't rise until 20:25AEDST at night, when it is receding from us. The reason why I emphasise this is that many people will see the Moon rising on the horizon, where it will look bigger due to the Moon illusion and say "I've seen the super Moon", when no, they haven't, the Moon was "supersized" half an hour it rose.

While all but a few dedicated Moon watchers will be unable to see the difference between this "Super Moon" and an apogee Moon with the unaided eye, photographing it is another thing entirely. Here are some images of the "Super Moon" of August 2014 that I took.   Again, it helps to have images of an apogee Moon to compare with, but you are going to have to wait until 8 June 2017 for your next apogee Moon opportunity.

However, as the Moon is rising it is also decreasing in size, so a series of images could capture the size decrease towards perigee. However, you WILL need a good zoom lens, binoculars or telescope to capture this, the magnification of an ordinary camera will be insufficient to pick up the size difference.

So, the "Super Moon" will be a little bit disappointing if you are not an obsessive Moon watcher with a good memory, but it will still be a beautiful Full Moon, and if you are handy with a camera and telescope you can capture the Moon as it decreases in size, and if you capture next years apogee Moon you can make some nice contrasting images.