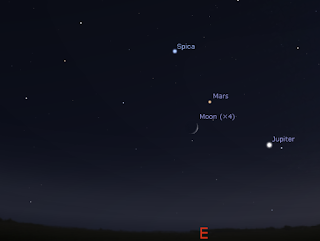 Morning sky as seen on December 14, 60 minutes before sunrise. The crescent Moon is close to Mars and forms a triangle with Jupiter and Spica. Similar views will be seen elsewhere in Australia at the equivalent local time. (click to embiggen).

The December edition of Southern Skywatch is  now up.

This month  sees most of the action move to the morning sky. Speedy Mercury  and Saturn are lost in the twilight.

The Geminid meteor shower is active towards the middle of the month, with the best rates in the early morning of the 14th to 15th.