The First Quarter Moon is Monday, November 27.  Mercury climbs higher in the evening twilight and is closest to Saturn low in the early evening sky on the 28th.  Venus is lost in  the morning twilight while Jupiter is now prominent. Mars is close to the bright star Spica on the 30th. 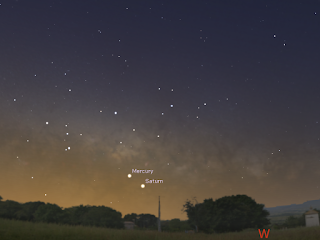 Evening sky on Tuesday November 28 looking north-west as seen from Adelaide at 20:55 ACDST  (45 minutes after sunset). Mercury is low above the horizon and is closest to  Saturn.

Mercury is visible in early evening and is above the western horizon in the late twilight. Mercury is quite prominent, and is well worth watching as it rises into the evening sky towards Saturn. On the 28th Mercury and Saturn are at their closest. Mercury is visible well after civil twilight, but you need a clear level horizon to see it at its best.

Saturn is visible low in the early evening twilight setting around 9:40 pm local time. Saturn is no longer a viable telescopic target, being too close to the horizon when the sky is fully dark. Saturn continues to sink into the western evening skies as the week progresses but the approach of Mercury will be interesting to watch.

The constellation of Scorpio is no longer a good guide to finding Saturn and Mercury any more as Antares is lost in the twilight. Both Mercury and Saturn will be obvious above the south western sky long before the fainter stars in the tail are visible. 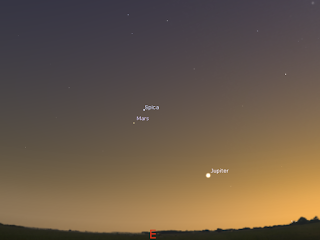 Morning sky on  Thursday November 30 looking east as seen from Adelaide at 5:26 ACDST (30 minutes before sunrise). Venus is lost in the twilight. Jupiter is prominent and Mars can be seen close to the bright star Spica.