Farewell Venus for another Year 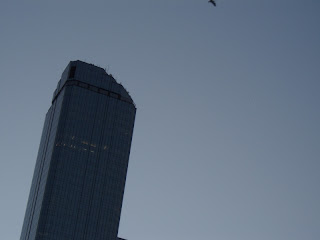 The other day I went looking for a familiar friend, and they were gone. It seemed like only yesterday that I saw them, but it must have been a couple of weeks. Isn't it funny how time gets away from you. Soon my friend will dissapear, and I will miss fantastic Venus.

I was quite used to seeing Venus in the daylight, I could find it in moments in my backyard, where I had worked out the landmarks for viewing at different times, I picked it up on a trip to Melbourne (see image to the left, you can just see Venus in the thumbnail, and it comes up nicely when you click on it and enlarge it) in between rain storms. 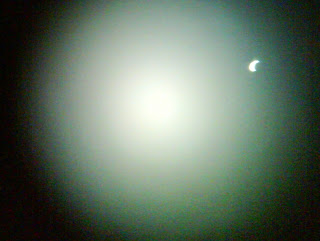 When we went down the beach a couple of weekends ago, with my hand covering the setting Sun I could easily pick out Venus high above the gold tinged waves, while the boys drew in the sand with oyster shells.

Then I wanted to show Venus to some friends, and the clouds moved in (so we talked and watched Dr. Who instead). When the clouds finally cleared this Monday, I was distressed to find that I could no longer find Venus in the daylight!

Of course, in the intervening weeks Venus had plunged closer to the horiozon, and become dramatically thinner. I rolled out the telescope Monday afternoon, while Venus was still respecibly high in the sky, and saw the thinnest Venus crescent I had ever seen. It was like a hoop of silver wire glowing in the sky.

Because Venus was low to the horizon, I couldn't use the 8" scope with time drive, and had to use the 4" unguided scope. Because the optimal time for viewing Venus clashes with the optimnal time for having dinner before the boys go feral, I couldn't set up my imaging system. Instead I whipeed out my handy mobile phone and took the image above. It's not as good as my Jupiter shot, or Lukes Saturn shot, in part because the 4" mounting isn't as robust, and holding the phone to the eyepiece produces more wobbles. In part because I had set the eyepiece on top, and had to stand on my tippy toes to try and hold the camera on. If the clouds roll back, I'll try a more sensibel setup.

But I don't have much time, Venus sinks lower every day, after August 14, when Venus, Regulus and the thin crescent Moon can be seen just above the horizon, Venus will be effectively unobservable.

But then again, late in August Venus will reappear in the morning skies, so we can renew our aquaintance when I rise in the mornings!

Comments:
How coincidental! I just last night looked for Venus and couldn't see it as I was leaving for home! I had got used to navigating by it, sort of, as I rode my motorcycle...

Mars Meets the ISS
And a really nice fireball...
ISS, Mars, Moon and the Pleaides on Tuesday Morning
A Birthday Competition for Ice In Space
Moon, Mars and Pleiades in the Morning.
Fantastic Mobile Phone Photos
HIV vs Behe
The 14th Carnival of Space
August Southern Skywatch Now Up
Asteroids in STEREO, a problem in Paralax