Images of the September 13 perigee Moon


After a foggy, foggy morning the evening sky cleared and I had a wonderful view of the Friday September 13 apogee (mini) Moon. I set up the telescope a bit after true apogee (which was 23:03 ACST) due to watching Aquaman with the family (a good bad movie). But I got some nice shots with my Xperia mobile phone mounted on my 4" unguided Newtonian scope.

In the images above I contrast this apogee Moon with the perigee full Moon of February 19. In the scope there was a very clear distinction, but I was unable to tell the difference visually, mostly because I couldn't remember what the February Moon looked like. Some people can. I have used an overlay as well to show the contrast. It might be a bit exaggerated by eyepiece distortion becuase the Moon was not exactly centred. 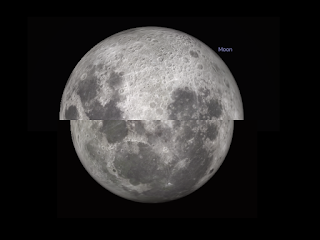 However, comparing it to the predicted contrast shows the effect of eyepiece distortion is relatively minor.

The September full Moon will actually occur tonight, just off apogee, but it will still be smaller than the February perigee Moon. So go out toniht an have a look!

You can see previous apogee/perigee pairs here and here