The last Quarter Moon is Saturday August 24.  Jupiter is easily visible as the brightest object in the northern evening skies. Saturn, near Jupiter, is high in the late evening skies. Globe at night world wide light pollution survey begins. 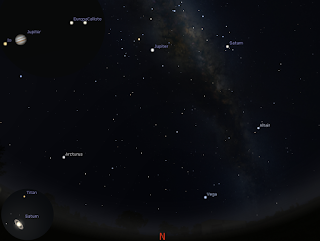 Sky at 19:15 ACST (90 minutes after sunset) on Saturday, August 24 looking north as seen from Adelaide. Jupiter is high above the northern horizon. Saturn is to the east. 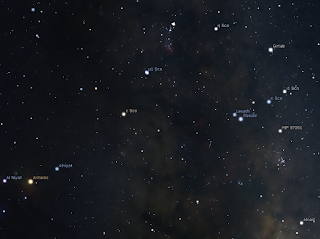 The hook of Scorpios on August 24 at 19:15 ACST (90 minutes after sunset). This chart is suitable for binocular viewing. The false comet is at the top of the image an cluster of stars and gas that, well looks like a comet. The bright pair of stars Lesath and Shaula point to the beautiful open cluster M7 well worth binocular exploration) and below that is the Butterfly cluster.


(Similar views will be seen elsewhere in Australia, click to embiggen). 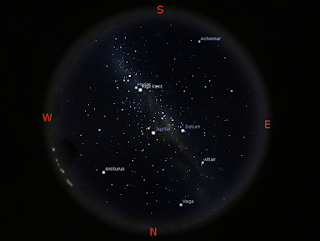 The whole sky at 19:10 ACST (90 minutes after sunset) on Saturday, August 24 as seen from Adelaide. The Southern Cross is beginning to leave the zenith. However, the galactic core (and the celestial emu) is at the zenith and there are numerous clusters and nebula high in the sky in the tail of the Scorpion and the lid of the teapot of Sagittarius  that will be a delight to explore while the Moon is out of the way. The binocular chart above will help you explore the tail of Scorpios as a start.

Mercury is lost inb the twilight and will return to the evening sky next month.

Jupiter is now well past opposition. However, it is still well worth observing. Jupiter is easily visible as the brightest object in the north-eastern/northern sky (aside from the Moon) and is located just below the distinctive constellation of Scorpius and the bright red star Antares. It is visible all evening long and is a good telescope target in the evening, being highest above the northern horizon around 7:00 pm local time.

Saturn was at opposition on July 10th, when it was visible all night long. Saturn is to the east of Jupiter and just below the "handle" of the "teapot of Sagittarius. It is best for telescopic viewing from just around astronomical twilight local time until the early morning and is highest above the northern horizon when it is ideal for telescopic imaging, around 9:30 pm local time.

Comments:
I read that we going to see comet tonight in Adelaide 9.15pm!!
Is that true or not!!
Thank you Sue

Can someone please tell me if that is true. About seeing COMET here in Adelaide tonight at 9.15pm
It will be so cool to see it...
Thank you Sue
Someone please email me please
Thanks Sue 😄

Sadly it is not true. It's UK newspapers being clueless about a comet that would be invisible to the unaided eye even if it had not disintegrated.