The full Moon is Thursday August 15.  Jupiter is easily visible as the brightest object in the northern evening skies. Saturn, below Jupiter, is high in the late evening skies.Mercury is visible briefly in the morning twilight.

The full Moon is Thursday August 15.The Moon is at apogee, when it is furthest from the Earth, on the 17th. 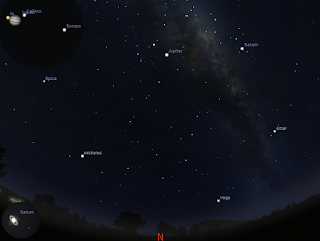 Sky at 19:10 ACST (90 minutes after sunset) on Saturday, August 17 looking north as seen from Adelaide. Jupiter is past opposition, and high above the north-eastern horizon. Saturn is below and just past opposition. 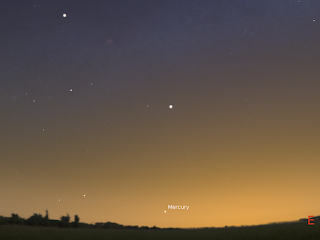 The sky looking north-east in Adelaide on the morning of August 17 at 6:28 ACST, half an hour before sunrise. Mercury is above the horizon but difficult to see in the twilight.


(Similar views will be seen elsewhere in Australia 30 minutes before sunrise, click to embiggen). 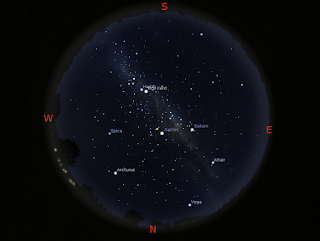 The whole sky at 19:10 ACST (90 minutes after sunset) on Saturday, August 17 as seen from Adelaide. The Southern Cross is beginning to leave the zenith. However, the galactic core (and the celestial emu) is at the zenith and there are numerous clusters and nebula high in the sky in the tail of the Scorpion and the lid of the teapot of Sagittarius  that will be a delight to explore while the Moon is out of the way.

Mercury is visible briefly in the morning twilight. But you will need a level, unobstructed horizon to see it. It then rapidly leaves the sky to return to the evening sky next month.

Jupiter is now well past opposition. However, it is still well worth observing. Jupiter is easily visible as the brightest object in the north-eastern/northern sky (aside from the Moon) and is located just below the distinctive constellation of Scorpius and the bright red star Antares. It is visible all evening long and is a good telescope target in the evening, being highest above the northern horizon around 7:30 pm local time.

Saturn was at opposition on July 10th, when it was visible all night long. Saturn is below Jupiter and just below the "handle" of the "teapot of Sagittarius. It is best for telescopic viewing from just around astronomical twilight local time until the early morning and is highest above the northern horizon when it is ideal for telescopic imaging, around 9:30 pm local time.

Comments:
Click to embiggen?
Have the writers of The Simpsons taken over here?
Shameful!

I have enjoyed embiggening pics on this site for quite a while now and I would be very disappointed if any other word was used to be honest. Perhaps this Unknown troll should stick to watching animated drawings instead of the sky. Keep up the good work Ian!

Stay obscure and obscured in Cairns.