The Sky This Week - Thursday July 25 to Thursday August 1

The New Moon is Thursday, August 1.  Mars is lost in the twilight.  Jupiter is easily visible as the brightest object in the evening skies. Saturn, just past opposition, is high in the late evening skies. Southern Delta Aquarids meteor shower peaks July 30.

The New Moon is Thursday, August 1. 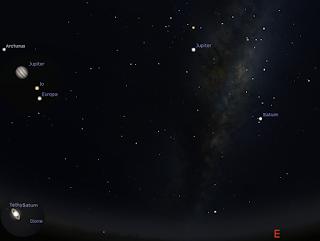 Sky at 18:58 ACST (90 minutes after sunset) on Saturday, July 27 looking east as seen from Adelaide. Jupiter is past opposition, and high above the eastern horizon with the Moon nearby. Saturn is below the pair and just past opposition. 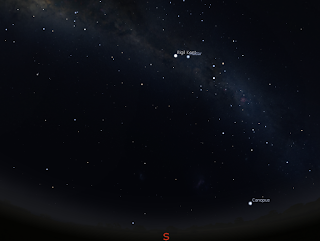 Sky at 20:00 ACST on Saturday, July 27 looking South as seen from Adelaide. The Southern Cross is beginning to leave the zenith. However there are numerous clusters and nebula still high in the sky that will be a delight to explore while the Moon is new. 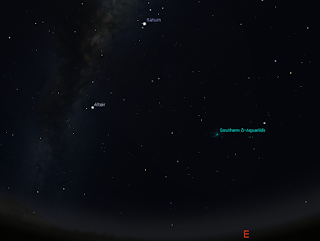 Evening sky looking east from Adelaide at 10 pm local time in South Australia. The starburst marks the radiant  (the point where the meteors appear to originate from) of the Southern Delta Aquariids. Similar views will be seen elsewhere at the equivalent local time (click to embiggen).

The Southern Delta-Aquarids meteor shower runs from from 12 July to 23rd August, peaking on Wednesday July the 30th. The number of meteors you will see depends on how high the radiant is above the horizon, and how dark your sky is. This shower is fairly faint, with the highest rate of around a meteor every 4 minutes. This year the shower occurs when the Moon is almost new so good rates should be seen.

At 10 pm, face east, and look 4 hand spans and two finger widths above the horizon. One finger width right is the 4th magnitude star delta Aquarii. The radiant is just above this star. This meteor shower should be visible from 10.00 pm until dawn. The best rates will be at 3 am in the morning of the 31st.

Use the NASA meteor shower flux estimator for an estimate of what the shower will be like from your location. You need to choose 5 Southern Delta Aquariids and remember to set the date to 29-30 July or 30-31 July 2019 and turn off daylight saving time. Unfortunately, both Chrome and Firefox have changed their security settings to prevent plugins from running, and the flux estimator only runs under Internet Explorer now. For more details see my meteor shower page.

Jupiter  Jupiter is now well past opposition. However, it is still well worth observing. Jupiter is easily visible as the brightest object in the north-eastern/northern sky (aside from the Moon) and is located just below the distinctive constellation of Scorpius and the bright red star Antares. It is visible all evening long and is a good telescope target in the evening, being highest above the northern horizon around 9:00 pm local time.

Saturn   was at opposition on the 10th, when it was visible all night long. Saturn is below Jupiter and just below the "handle" of the "teapot of Sagittarius. It is best for
telescopic viewing from just around 9 pm local time until the early morning and is highest above the northern horizon when it is ideal for telescopic imaging, around 11 pm local time.