The Sky This Week - Thursday August 29 to Thursday September 5

The New Moon is Friday August 30.  Jupiter is easily visible as the brightest object in the north-western evening skies. Saturn, near Jupiter, is high in the evening skies. Globe at night world wide light pollution survey ends.

The New Moon is Friday August 30.  The Moon is at Perigee, when it is closest to the Earth, on the 31st. 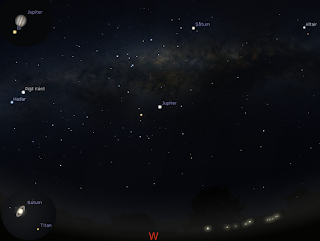 Sky at 22:00 ACST on Saturday, August 31 looking west as seen from Adelaide. Jupiter is high above the western horizon. Saturn is to the east.

Similar views will be seen elsewhere in Australia at the equivalent local time , click to embiggen. 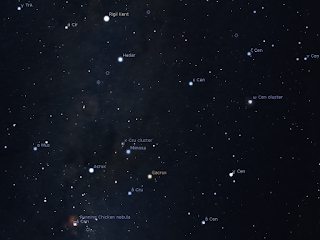 The area around the Southern Cross and pointers on August 31 at 19:20 ACST (90 minutes after sunset). This chart is suitable for binocular viewing. While the whole area is well worth binocular exploration the jewel in the crown is omega (ω) Centauri. This is a magnificent globular cluster, readily visible to the unaided eye as a fuzzy dot in dark sky sites.

If you draw and imaginary line between Hadar (ß Centauri) and Mimosa (ß Crucis), then draw another imaginary line perpendicular to this out on one and a half Hadar -Mimosa distances, you will be at omega (ω) Centauri. (Similar views will be seen elsewhere in Australia, click to embiggen). 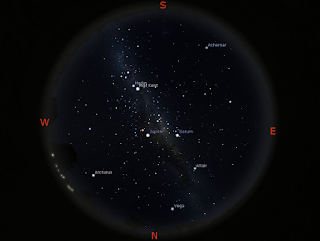 The whole sky at 19:20 ACST (90 minutes after sunset) on Saturday, August 31 as seen from Adelaide. The Southern Cross is beginning to leave the zenith. However, the galactic core (and the celestial emu) is at the zenith and there are numerous clusters and nebula high in the sky in the tail of the Scorpion and the lid of the teapot of Sagittarius  that will be a delight to explore while the Moon is out of the way. The binocular chart above will help you explore the area around the Southern Cross.

Jupiter is now well past opposition. However, it is still well worth observing. Jupiter is easily visible as the brightest object in the north-western/western sky (aside from the Moon) and is located just below the distinctive constellation of Scorpius and the bright red star Antares. It is visible all evening long and is a good telescope target in the evening, being highest above the northern horizon around 6:30 pm local time.

Saturn was at opposition on July 10th, when it was visible all night long. Saturn is to the east of Jupiter and just below the "handle" of the "teapot of Sagittarius. It is best for telescopic viewing from just around astronomical twilight local time until the early morning and is highest above the northern horizon when it is ideal for telescopic imaging, around 8:30 pm local time.