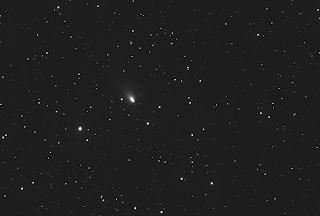 Comet 168P Hergenrother imaged with the  T5 instrument of  iTelescope on 12 October, 2012. 10 x 2 minute images were stacked with ImageJ, then SUMMED (click to embiggen).

Comet 168P Hergenrother is a rather nice little comet that surprised everyone by going into outburst. After reaching magnitude 9 (when it was supposed be be no brighter than magnitude 15), it has begun to fade.

However, it is still quite bright, around magnitude 10.

After missing out on imaging the comet (weather, asteroid 2012 TC4, other distract.. Ohhhh Shiny), I finally got a nice image of it. If you embiggen the image, you will see lots and lots of teeny tiny galaxies.

Mars in the Head of the Scorpion (11-13 October)
Near Earth Object 2012 TC4 Flys by (12 October 2012)
Carnival of Space #270 is Now Here!
Southern Skywatch October 2012 Edition is now up.
Near Earth Asteroid 2012 TC4 11 October 2012
The Sky This Week - Thursday October 11 to Thursda...
Aurora Happening Now in Tasmania
Open Day at Siding Spring Observatory with Astrosw...
My Images of the Jupiter-Moon Graze, October 6, 2012
Occultation of Jupiter 6 October, semi-live blogging