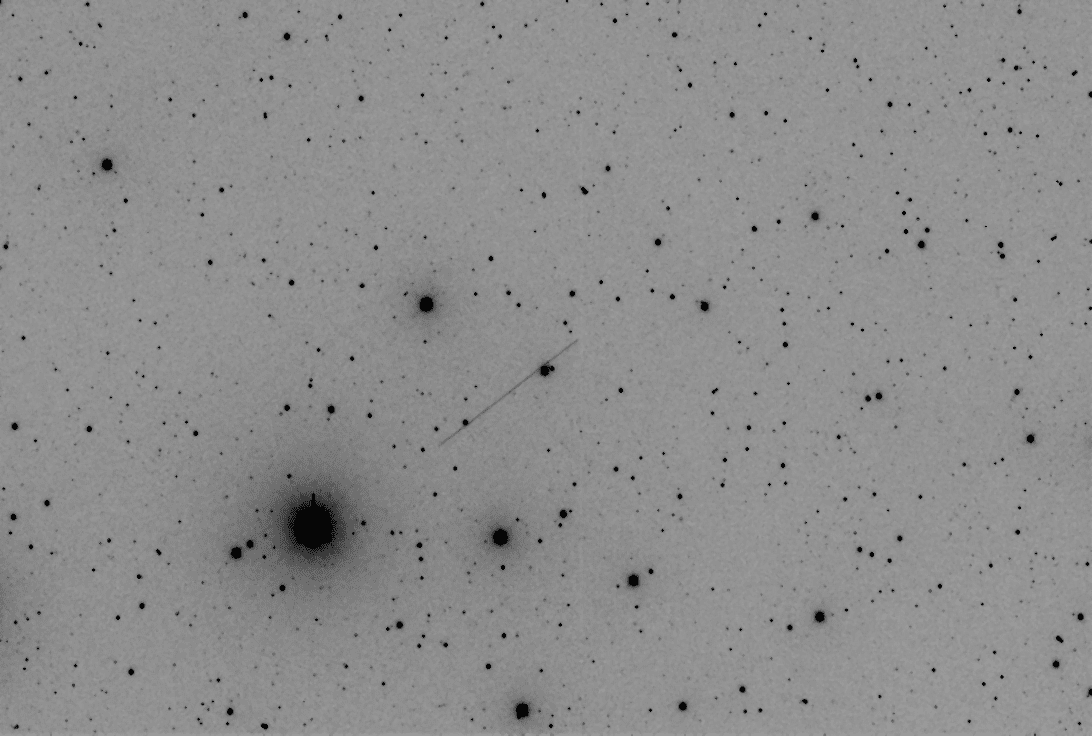 Images taken form 2:00 UT on, when the 22 meter asteroid was just 5 hours from closest approach of a mere 0.2 Earth Moon distances away. Not satellite scraping, but still reasonably close. 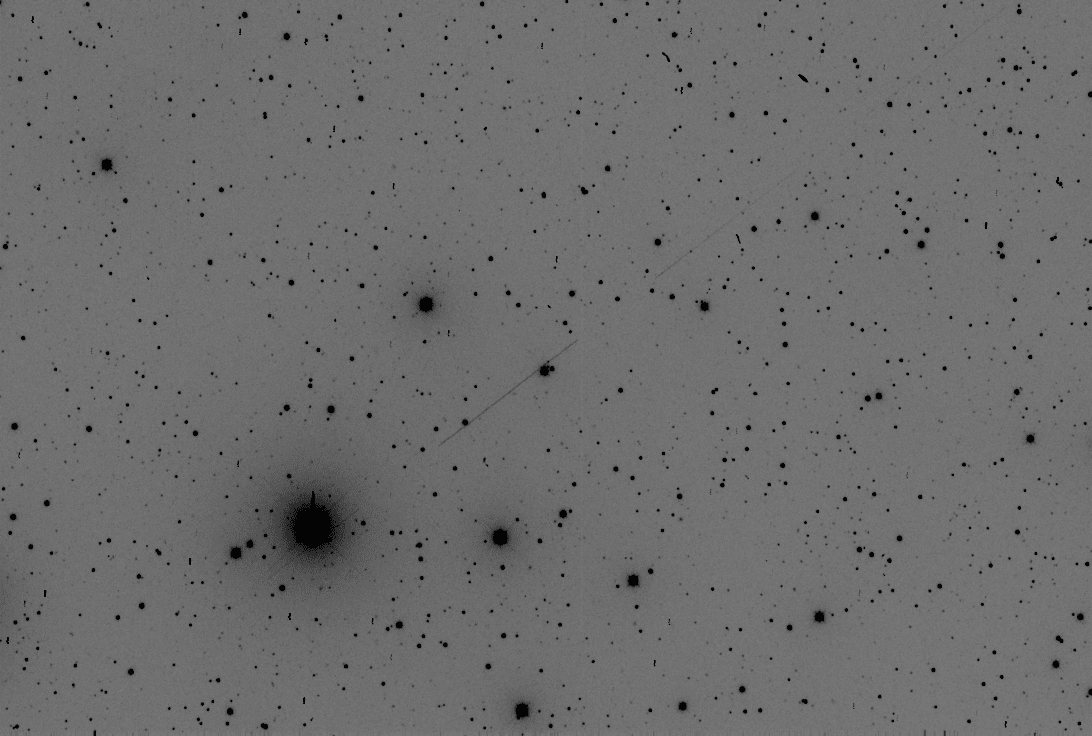 Overlay of all 5 images using the MAX Z project function of ImageJ (click to embiggen for full asteroidal awesomeness). Images were processed with fairly strong adjustment to brightness and contrast.

There is a very large difference in the brightness of the asteroid in these images (look carefully for the first one, it zips through the bright star image). This implies the asteroid is rapidly rotating and of uneven shape or colour.

After catching 2012 TC4 in iTelescope T14 yesterday, I was all fired up to get it as it was near closest approach.

Sadly at closest approach it was below the horizon from all of the iTelescope scopes.. But I was able to catch it just on astronomical twilight. 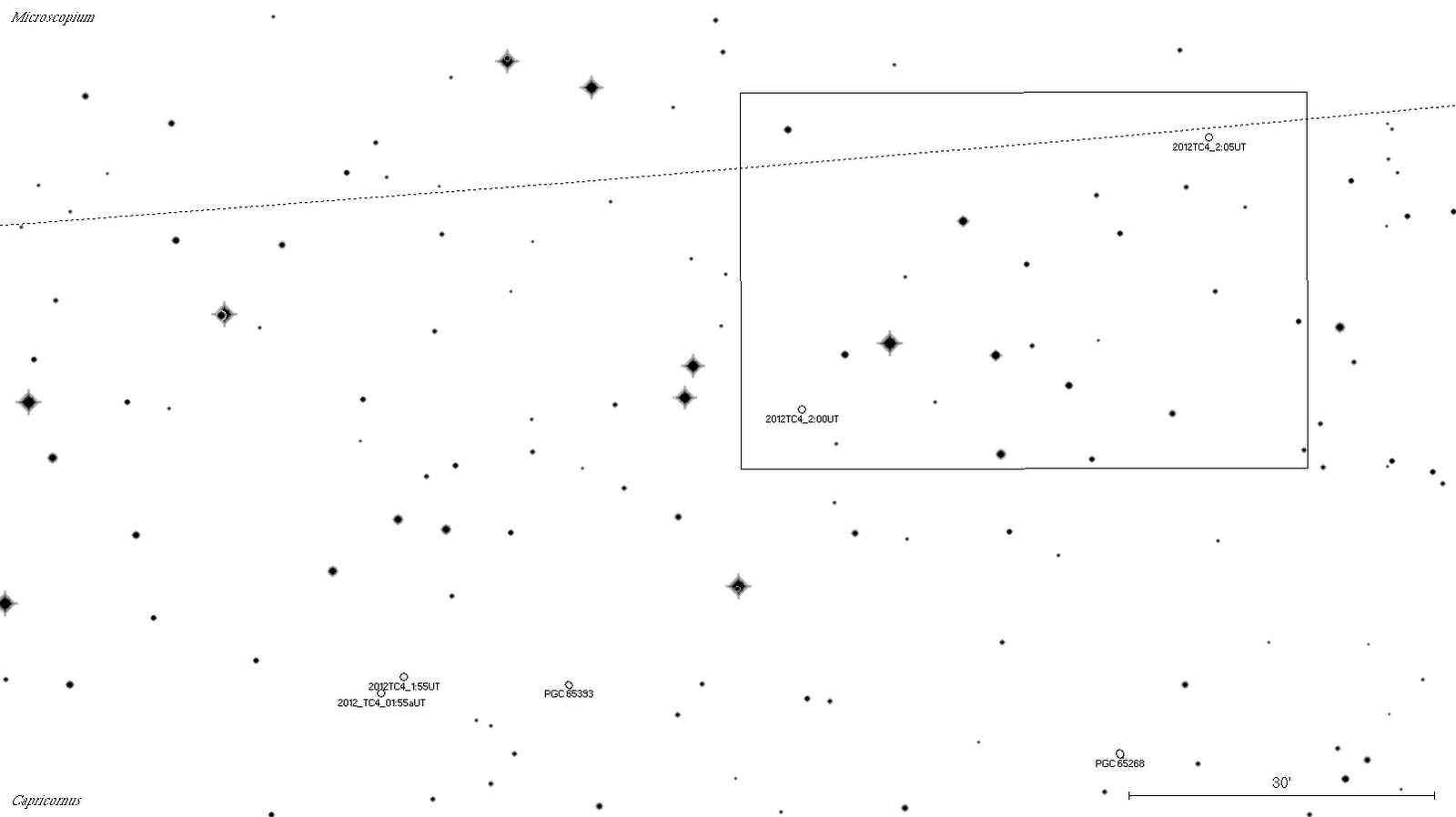 Unlike yesterday, when the asteroid was moving fast, but not too fast, today as 2012 TC4 was coming within 0.2 Earth-Moon distances of us, it was moving at a fair clip of around 10 arc seconds per minute at the time of imaging.

Under these circumstances trying to track the asteroid with one-line elements would fail (the scopes drives can't push it that fast).

So  I used my standard technique, which is to choose a star not far from where the asteroid would be, and set that as the target, then wait for the asteroid to zoom by. "Would be" was the operative word. The asteroid was moving so fast that by the time the telescope slewed to the position were the asteroid was, it would have moved out of frame.

So I measured the time T5 took to slew, autofocus and begin imaging in a series of recent images, and used the average time from start of my run to actual imaging (around 5 minutes) to set the telescope position.

I started the run exactly at astronomical twilight (1:55 UT), and set up the image area to cover where the asteroid would be 5 minutes later. And lo and behold it worked!

Here's a video of the pass. I would have gotten more images but some git was hogging the scope fro something called the Pluto Project (Oh wait! That's me!)

Comments:
@"Images taken form 2:00 UT on, when the 22 meter asteroid was just 5 hours from closest approach of a mere 0.2 Earth Moon distances away."

Carnival of Space #270 is Now Here!
Southern Skywatch October 2012 Edition is now up.
Near Earth Asteroid 2012 TC4 11 October 2012
The Sky This Week - Thursday October 11 to Thursda...
Aurora Happening Now in Tasmania
Open Day at Siding Spring Observatory with Astrosw...
My Images of the Jupiter-Moon Graze, October 6, 2012
Occultation of Jupiter 6 October, semi-live blogging
Occultation/Graze of Jupiter by the Moon Saturday ...
The Sky This Week - Thursday October 4 to Thursday...