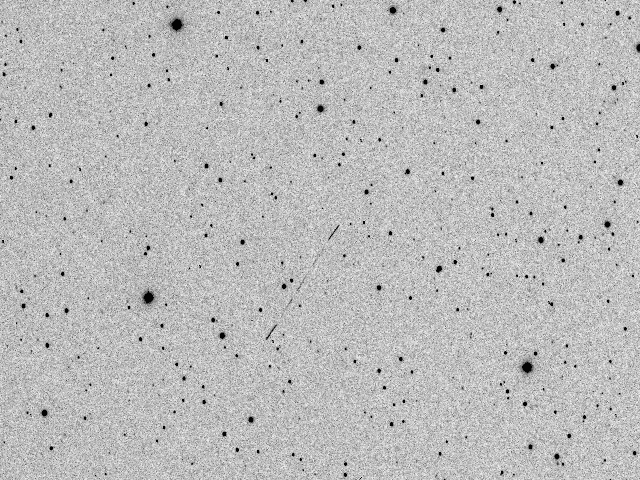 Near Earth Asteroid 2012 TC4 imaged with iTelescope T14 (New Mexico) on 11 October 2012. The image is a stack of 5 x 120 second exposures. The images were stretched in FITSLiberator, then stacked in ImageJ, a MAX Z project made and a light despeckle.

By Touatis, 2012 TC4 is giving me grief! More than almost any other NEO I've tried to image. My attempts to capture it in iTelescope T5 using the MPC 1 line ephemeris with tracking has come to naught, even stacking 10 x 90 sec images did not reveal the 22 meter asteroid.

iTelescope T14 was more accommodating, and I was able to capture the little blighter. Mind you, it required a lot of hunting about in the image to find it. The asteroid was magnitude 15.9 when the image was taken. It is at closest approach on the 12th at 6:35 UT, but that will be below the horizon of the northern hemisphere iTelescope scopes.

Even so, just before closest approach, the asteroid is moving at such a spanking pace (I don't thing the auto-guide can push the scopes to follow the asteroid it is going so fast) it will be a challenge to image, and so close to earth that standard planetarium programs will have not plot it correctly.

And a short animation of the asteroid is below.