No, there will not be planets aligned over the top of the pyramids 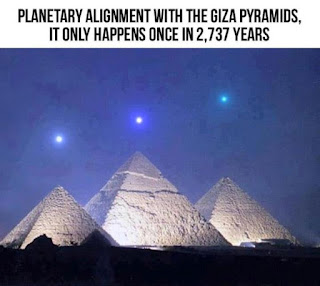 No, the sky over the pyramids will not look like this on December 3, 2012 (image credit Universe Explorers)

There is a picture doing the rounds at the moment that allegedly shows a simulation in Starry Night Pro of how the pyramids will look on December 3, 2012. Each pyramid has a planet glowing over their tips. This is the blurb that accompanies the image.

There is only one teeny tiny problem ... the sky over Giza will look nothing like this on 3 December, 2012 one hour before sunrise. 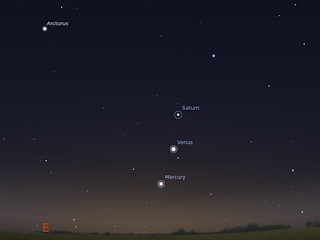 Firstly, although the planets Mercury, Venus and Saturn will form a nice line, it will be nearly vertical from Giza on December 3 (see the Stellarium simulation of the view from Giza to the left (click to embiggen)).

The second is the Pyramids orientation in the alleged simulated image. The image shows the planets floating over the Pyramids ... to the north-west! The planetary alignment will be in the south-east, you just won't see them like that.

Tip of the hat to David Greg who pointed the non-alignment out first. 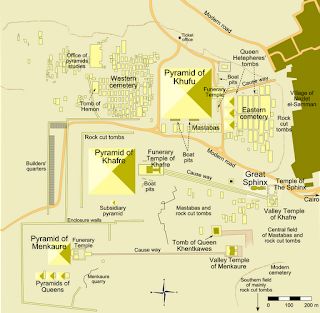 The orientation of the pyramids at Giza, the only way for the pyramids of the Queens to show up in the alleged simulated image is if you are looking north-east up the line of pyramids. For the planets to line up with the tips of the pyramids they would need to be in the north-west.

Which is impossible as the planets rise in the south east.

Comments:
Thousand thanks for explanation! Although I wish it was true :)

End results: A society completely free of the use of money. Each and every human being on the planet will live like billionaires. GUARANTEED.
2+2=4 universally. Same with the formula above worldwide.
Not ONE child would starve again EVER. That alone should be incentive enough.

If this is from the Government or NASA DON`T BELIEVE IT, IN FACT BELIEVE NOTHING FROM THE GOVERNMENT.

This post once again shows us that knowledge gives in the light that moves away the darkness of the ignorance. But is there many minds that adore darkness, staying ignorant, it is not?

Thanks for this. I resourced your blog for a post I wrote on mine and included a link back to your site. Love your list of good space sites.
notestoponder.wordpress.com

I have Calculated the point where the planets projections will be aligned with each pyramid axis and this point is far away from the pyramids and between the pyramids and this point there is a high ground so it will be possible to view it like the image by any mean.unless from a plane or a balloon or something that can elevate above the high ground from the point calculated.

The windows of this view will be just an hour before sunrise.

The exact coordinates of the location :

For the record, I did not create the picture presented here, (shared with the world just days after it was fused to my blog after a full year quietly being viewed by hundreds of people a day….) however I am responsible for the information that will be found beneath that picture, and all subsequent responses below in the comments section that, as of this date August 28, 2012, bare my name.

I found the picture in question on another website that was mirroring my '2012 and the Pyramids at Giza' blog, and down in the comments section I wrote, "...here is an artist’s idea of what December 3, 2012 planetary convergence will look like one hour before sunrise.

Before the posting of that comment that picture was not fused with my blog. I was not even asked if that picture should be placed within my blog... truth is if the people at world-mysteries.com had asked, I would've said, "why not... it’s an awesome picture." For you see, if you actually take the time to read my entire blog, and my comments below, you will learn the planetary alignment on December 3, 2012 is just the beginning. Its up to the reader to decide if they want to see or not... I'm not interested in making anyone believe or disbelieve what I had to say. I'm only interested if they're willing to see. What I do find interesting however, is how the rest of the information found within that blog has been completely ignored by all and only the "new header picture" is being torn apart all across the Internet while internet news site after internet news site keeps calling me a hoaxer. Very interesting indeed. Perhaps, just perhaps using the picture in question is an attempt to harden people from looking just below the surface by some… for if a person is willing to do just a little bit of work… the information that they will in fact find... it just might force the whole world to re-examine everything we've ever been told to believe in.

Outside of that, thank you for taking the time to share my blog with your readers and your concerns.

While the image of the pyramids themselves is incorrect, it does appear that something close might be possible if the viewer is located to the north west of the pyramids.

They won't be overlapping each other, but it does appear that one could find an eyepoint where the planets were above each pyramid (though it looks as if terrain would require that the eyepoint be above the ground).

Reading Charles Marcellos comments, he is saying he lies to people and it's up to them if they want to believe it or not. Uh. OK. Are you that desperate for attention?