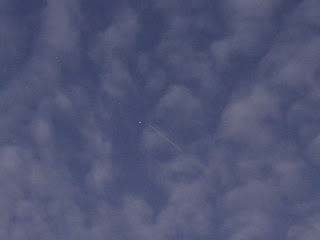 The Shuttle Atlantis (mission STS-135) seen through the cloud as it streaks past the bright star Antares at 18:00 ACST. Image taken with a Canon IXUS at 200 ASA and 4 seconds exposure (Click to embiggen).

WOOT! Got the shuttle on it's historic (almost) last orbit as seen from Australia.

I was a bit worried, after going on 891 ABC local radio this afternoon to get people to look at the pass, the clouds were coming over again, although not as thick as yesterday, and the twilight sky was quite bright.

Would the shuttle be visible against the twilight glow? CalSky predicted to shuttle would be magnitude -1.1, which should be bright enough, but if the shuttle turned or had a manoeuvre not accounted for in the CalSky calculations it might be too dim. All the other shuttle passes I had seen were dim. 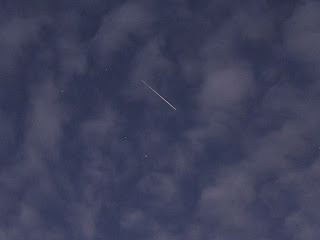 The ISS seen through the cloud as it streaks past the bright star Antares at 18:02 ACST. Image taken with a Canon IXUS at 200 ASA and 4 seconds exposure (Click to embiggen).

As I was worrying about this, and taking some test shots, I suddenly saw the shuttle zooming underneath Saturn and then Spica, and it was bright. Easily showing up through the clouds.

Unfortunately, because of the twilight skies brightness and the clouds, I wasn't exactly sure where the shuttle was with respect to where the camera was pointing. So I only got a few shots in the frame as I dithered. Still, I got one just above Antares (also, I was trying to actually watch the shuttle, rather than concentrating on Astrophotography). Dean Male also got some good shots, and we will be doing our parallax calculations again.

As the Shuttle headed towards the horizon, the ISS rose. The ISS was much brighter and much easier to photograph (but further from Antares). For the very last time the ISS and the shuttle were in the sky together.

Still, after 30 years the shuttle program comes to an end, an entire generation has grown up with the shuttle climbing into the sky. People will still go to the ISS, and still go into space. But for a long time our ability for humans to do more than just reach the ISS will be gone. We have had many highs (like the mission to fix the vision of the Hubble telescope) and lows (the tragic loss of the crews of Challenger and Columbia) and some spectacular images.

I'll certainly miss the shuttles, to me it seemed we were on the threshold of a true sustainable presence in space. Here's a podcast of Australian astronaut Andy Thomas talking about the significance of the shuttle program and his memories of it.

But there is still a lot going on in space. Mercury is being orbited by Messenger, Dawn is sending back the first pictures of the asteroid Vesta, the New Horizons mission is on its way to icy worlds from the that will throw light on the origin of the solar system, Cassini sends back astounding images of Saturn, and the Mars rover keeps on trundling. As well the Kepler Telescope is finding hosts of extrasolar worlds. And that's just a short list.

So farewell space shuttles, you inspired us, let us remember you fondly.

Comments:
Well done! Great shots thank you so much.