Virtual telescopes such as Google Sky, World Wide Telescope and Wiki Sky have allowed people to explore the sky in great detail at many different wavelengths. However, if you are not familiar with the sky some things may be of great puzzlement; especially the difference in view between the infrared sky views and the visual data.

First off you should know something about the images. All the programs use the same databases, for example the Palomar Deep Sky Survey for visual data, and the IRAS survey for infrared images. There are (very) minor discrepancies in the location and appearance of objects between the three programs due to they way the images are digitized/compressed and stitched together, but they are using exactly same images.

Another thing to remember is that the DSS plates date from 1956-1958 (yes, that's right), and the IRAS images date from 1983. So they reflect the sky situation decades ago. Nonetheless, the sky revealed by these images can be quite astounding.


Take for example this image of a bright, angry looking object in the IR view of Google Sky (right image, also seen in world wide telescope and wiki sky, search on the following coordinates 09:47:27, 13:16:27), absent from the visible light view (left image).

This object is now being touted as comet Elenin, a while ago it was being touted as Nibiru. In fact it is is the carbon star CW Leonis (also known as IRC +10216, PK 221+45 1 and the Peanut Nebula). CW Leonis is the brightest object in the 10 μm infrared sky, and well known to experienced observers. But if you are new to the field, it can look quite mysterious.

Now take a look at the object in the left hand image above (this time in Wikisky at 06h 08m 55s, 22 47' 21", you can find it at the same coordinates in Google Sky and WorldWide Telescope). This also has been claimed to represent Nibiru and/or Elenin. It actually looks like a planetary nebula, a bit like the Cats Eye Nebula, however, zooming out reveals its true nature (see image right).

It is an artifact, a vagrant blob of light on those plates, there's a few of them on the larger image (and some edge artifacts from differing exposures between the plates as they stitched the images together, Google sky uses a different approach to compressing the images, so the object and the other artifacts look slightly different). Despite being one of the best instruments of its time, the 48 inch telescope at Palomar Observatory did not always take perfect images. 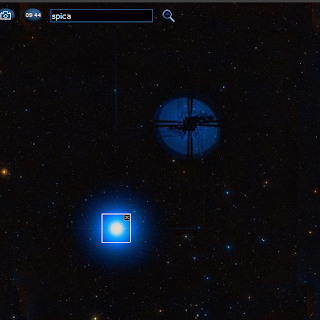 A nice example is this image near Spica in Virgo, where you can see an image of the primary mirror in the picture just above Spica (the bright star in the target box).

As well, while the Palomar survey was roughly only 99% complete, there are some areas where plates were not of high enough quality (or don't digitize well), some of these blank spots are claimed as "cover-ups", but just represent areas of data loss for one or more reasons.

Similarly, the IRAS survey was not complete (around 96% of the sky), and there are a number of missing frames where images weren't taken, or the images were defective.

So while the virtual telescopes can give us unprecedented views of the sky at multiple wavelengths, what you see can occasionally be difficult to interpret. Before rushing off to claim comets or brown dwarf stars, take a bit of time to become antiquated with astronomical objects, and the characteristics of the images. You may learn something wonderful.

Comments:
So your saying because telescopes suck we should believe that this "comet" is the one ancient civilizations called the great deceiver, Sumerians spoke of a 10th planet called Nibiru, Babylonians called it "planet of the crossing", The Bible calls this planet Wormwood or even Rahab, The Incas call it Hercolubus, The Kolbrin calls it the destroyer, and The Oahspe calls it the Red Star...

Binary star system is thee most common star system in the universe! This brown dwarf is a failed sun that runs on a long elliptical orbit around the sun every 3,600 years or so. Guess what, most scientists agree that we were experiencing many many major and out of the ordinary natural disasters around 3,600 years ago.

This brown dwarf can be hard to spot (as many older civilizations said!) because of the facts that it doesnt reflect much light due to its temperature, its outer core is just above absolute zero while its inner core is heated so IR only thinks its a small "comet", its compound substance, and its location..

Why would NASA or Governments tell us something that would only cause riots and panics, they know they cant save us all!

Our telescopes don't suck (that much), but if your only "evidence" that Nibiru exists is misidentified carbon stars, planetary nebula and artifacts, then there is no reason to suppose something exists at all.

Brown Dwarfs are only hard to spot because they are so far way. The closest are around 12 light years away, and something that is non-self luminous (or very weakly luminous) will be hard to find visibly.

But up close, no. Something that is 4 times Jupiter's size would be very easy to spot, after all, we have found small chunks of freezing ice smaller than our Moon trundling in the outer dark. A 4 x Jupiter sized object in the outer solar system (closer than 500 AU) would be obvious to medium sized amateur equipment and up. See
http://astroblogger.blogspot.com/2011/06/comet-elenin-is-not-satellite-of-brown.html and
http://astroblogger.blogspot.com/2011/04/looking-for-nibiru.html

And as for Dwarf stars being invisible because they are so cold. This is nonsense. They may not produce (much) visible light of their own, they reflect light perfectly well. An objects reflective abilities are not changed by it's temperature, Pluto reflects light quite well even though it is a mere 45K.

And Brown Dwarfs aren't cold, the warmest are around 2200 K, and the coldest detected so far is ~370K (about the temperature of a hot cup of tea).

So where is it, this Elenin or Niburu or whatever, harmless as it may be? Where is it?

For images and spotters maps of Elenin, see http://astroblogger.blogspot.com/2011/08/comet-elenin-in-stereo-h1b-august14.html

Thank you so much for clearing that up! As for the brown dwarfs, I had no idea they were so cold! Also, don't they have an immense gravitational pull? As for the Nibiru issue, I thoroughly agree (I hope I spelled that correctly). If something the size of four Jupiters were coming towards us, it would be QUITE difficult not to notice it.

You notice something there right now in infrared. they are blocking it too but right behind it you see the light. it doesnt matter if it are crappy cams etc. there is Something there!! what is it ? a carbon star. is that dangerous ? Sounds quite dangerous carbon hmmm star ? hmm star like the sun is a star? Seems anyhow very! dangerous if it gets near . get the truth out