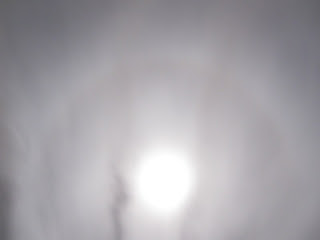 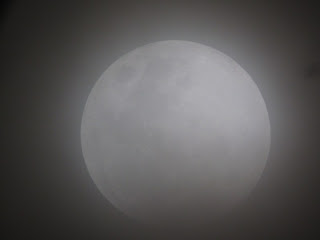 No two eclipses are alike, every one has it’s own character. From standing in my Father-in-law’s backyard watching with the Bettdeckererschnappender weisel, to the rumbustious eclipse party of the August 2007 eclipse, the depth, colour and feelings associated with each eclipse is unique. 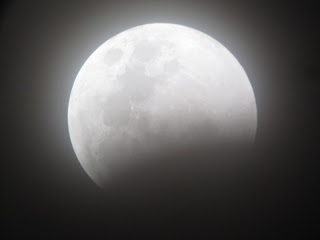 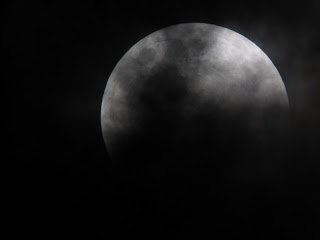 This eclipse was mine alone. No-one else wanted to get up at dark o’clock to see the Moon go red in the deepest eclipse since 2000. But it wasn’t quite the quiet contemplative eclipse I envisaged. At 3:30 I stumbled out of bed, trying not to trip over things and wake anybody else up. I had set up the scope and camera gear the night before, laid out all my warm woollies and borrowed EldestOnes headlamp (mine has never been the same after SmallestOne got to it), so getting set-up was accomplished quickly.

The morning started well, although there was cloud, it was all thin stuff, with the occasional darker cloud hanging about. The Moon ringed with a 22º halo, and the north pole smudged with the faintest hint of penumbral shadow, presaging good things to come.

Trouble started straight away though. My normally reliable time drive decided to engage intermittently, so I had to constantly fiddle with the scope to line it up. This wasn’t so bad early on, when the brightness of the full Moon made for short exposure times, but as the night wore on the longer exposures had substantial drift. Still, these operational difficulties did not dim the main event. Rule 1 of astrophotography is to never let the act of photography interfere with enjoying what you are photographing. 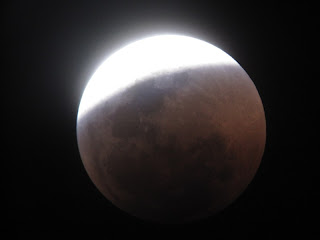 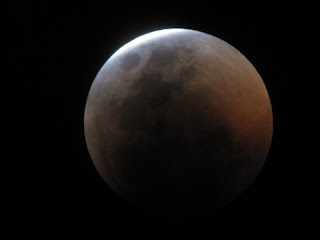 As the Earth’s shadow began to nibble at the Moon, two jets went over, the two contrails framing the Moon, and the contrails casting shadows on the cloud deck below. Then for a while the cloud abated, and I could see the shadow inching its way across the Moon.

About midway the cloud got heavy again, with the half-eclipsed Moon playing peek-a-boo with the clouds. I was also trying to image the eclipse with my mobile phone through my binoculars. This was less than successful, at least partly because my new mobile has a camera button obviously designed for creatures with tentacles instead of fingers, and when wearing gloves the button is almost inaccessible. 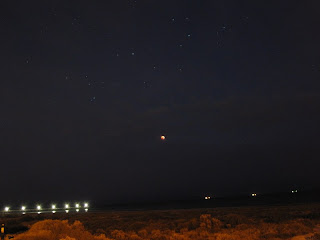 I was also trying to live-blog the eclipse, which I could do when the clouds obscured the Moon. If I had thought to tweet the live blog earlier it might have helped. Then the clouds came off for the final part of the eclipse, the thin sliver of the Moon contrasting with the shadowed part, glowing redly from reflected earth-shine. Finally the Earth's shadow engulfed the Moon. Often the eclipsed Moon is described as copper-coloured, but this was a definite deep red. This was possibly due to the dust clouds from the Chilean volcano, and the fact that this was a very deep, center-line eclipse.

Then, as the eclipse neared it's deepest part, the clouds came over again. But this time they were solid. I kept on popping out, but there was nothing to be seen until quite late, when the Moon had sunk below the working limit of the telescope. For a few brief minutes the red Moon glowed between the clouds in the early twilight sky, then they closed over again.

So I wandered inside to make breakfast, and reflect on what was possibly the best Total Lunar Eclipse I had ever seen.