The Last Quarter Moon is Thursday June 23. On the morning of 26 and 27 June the crescent Moon, Venus, Mars and Jupiter form a line in the morning sky. Saturn is close to the star Porrima, gamma Virginis. 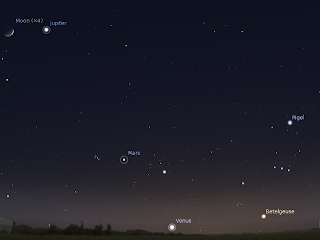 Morning sky looking north-east as seen from Adelaide at 6:30 am local time on Sunday June 26 showing Jupiter, with Mars and Venus lined up below. Similar views will be seen elsewhere at the equivalent local time. Click to embiggen.

On the 26th and 27th The Crescent Moon is near Jupiter, forming a line-up with Mars and Venus, you will need a clear, level eastern horizon to see Venus. On the 29th the thin crescent Moon will be just under Mars. 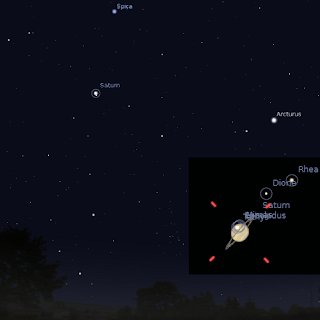 Evening sky on Saturday June 25 looking north-west as seen from Adelaide at 9:30 pm local time in South Australia showing Saturn very close to Porrima (gamma Virginis). Similar views will be seen elsewhere at the equivalent local time (click to embiggen, Porrima is just visible as a dot on the side of Saturn in this image).

Inset, the telescopic view of Saturn on the 18th , you will need a fairly large telescope to see any moon other than Titan. Click to embiggen.

Saturn is readily visible as the bright yellowish object not far from the bright star Spica. It is high enough for telescopic observation in the early evening. Saturn is still close to the star Porrima (gamma Virginis). They are moving apart, but are still paired close together. 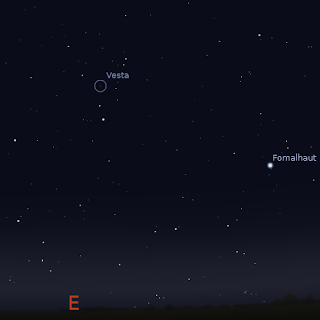 The location of Vesta as seen at 23:00 pm on June 25th looking east from Adelaide, similar views will be seen at equivalent local times elsewhere. Click to embiggen,

Comments:
For God's sake Give us an efemeris

An ephemeris fro what?