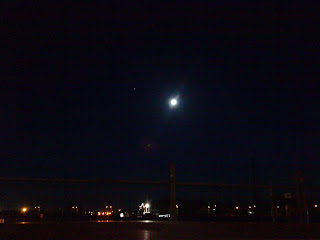 The ISS about to glide over the top of the Moon, taken with a mobile phone on "night time" setting. The reddish dot lower left is a camera artefact, the ISS is the bright dot immediately to the left of the Moon.

On Saturday night the ISS was due to pass over the Moon, but Saturday saw us helping Kyack Cousin clean up, then we went to the Port Adelaide Christmas pageant. After the pageant we hung out at the kids concert and then went to get a burger at the Port Dock Hotel.

Along with almost everyone else in the Port. An hour later our burgers hadn't arrived and the time for the ISS pass was almost up. At least we got to watch the Morris dancers while we waited. Of course, I didn't bring my camera, because we were going to be well home (sigh). But I did have my mobile, so I wandered over to a convenient...um, squarish metal thing and set up.

The ISS did it's thing, and I got several shots with the mobile phone. As you can see they came out reasonably well, except of the one with the ISS directly over the Moon, I moved when taking that. So you can use your mobile phones for satellite imagery as well.

I pointed out the pass to the kids and the people at adjoining tables, who were suitably impressed. 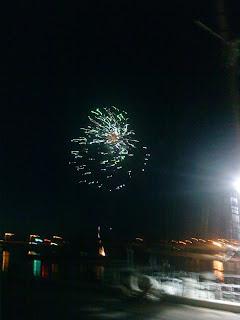 Then the burgers arrived.By the time we finished them off we were able to enjoy the fireworks, so everything worked out okay.

Global Warming Updated
Leonid Meteor Shower, Thursday November 18, 2010
Mars, Mercury and Antares
I Spoke to MiddleOnes Class about Astronomy...
The Sky This Week - Thursday November 18 to Thursd...
I Finally Know My Purpose In Life....
Geo-xcentricities part 2; the view from Mars.
Meet Archie
Another Kreutz Comet in STEREO
Web Conference on the Orign of Life