I Spoke to MiddleOnes Class about Astronomy... 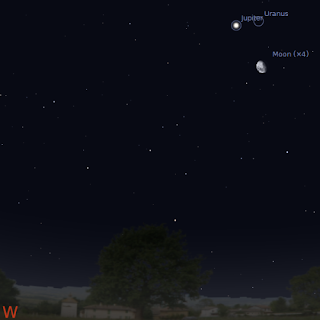 Jupiter near the Moon, as seen from my suburb at 11:30 pm daylight saving time.

...and it was terrific! The kids were amazing and I had so much fun!

MiddleOnes class has been doing space and the solar system, and as geeky astronomy dad I was invited to talk to them about space. I revised my talk about using the Moon to guide you to the planets that I gave to the Bellevue Heights Junior Field Naturalists Club.

For one thing, the kids were older (11-12), and as I said they had been doing space in class, so I had to give a more advanced perspective. I updated and upgraded my powerpoint and I completely revised my Celestia and Stellarium scripts (I have to add a time command to the Celestia script so that dactyl doesn't drift out of the field of view). I printed out a handout with a star map and the times when the Moon would be near bright planets. This time round I was able to use Stellarium to illustrate how to use the star maps (these things are not intuitive).

But as I said, the kids were fantastic. Enthusiastic, perceptive and asking really good questions. The questions ranged from what caused the tides, to what the Moon looked like 3.5 billion years ago, to what caused Enceladus geysers, to what is inside a black hole. I got to use my tour of exoplanet skies script. One student even had heard of the newly discovered baby black hole! Now that is switched on, I only wish my University students were as enthusiastic. I could have talked until my voice gave out.

Maybe in a few years time these kids will be solving mysteries of the Solar System, or discovering comets. But tonight, at least, some of them will be looking at the skies with fresh eyes.

I've put up the updated scripts for you to download and play with (waves to MiddleOnes class mates if any are reading this); download Moons.cel and put it in your Celestia folder, then use File | Open Script to run it. Download The Moon Guide and put it in scripts folder (unfortunately, it's version 0.9 script, I'll translate it to 1.05 later). If you don't have the free programs Celestia and Stellarium you can download them from the links (Kids, ask you parents/guardians first before downloading stuff).