The Full Moon is Monday November 22. Mercury climbs the Scorpion and meets Mars. Jupiter is easily seen in the evening sky. Venus visible together with Saturn in the morning sky. Leonid meteor shower on the morning of the 18th will be disappointing. Comet 103P Hartley heads for a mass of open clusters. The variable star Mira is brighter. 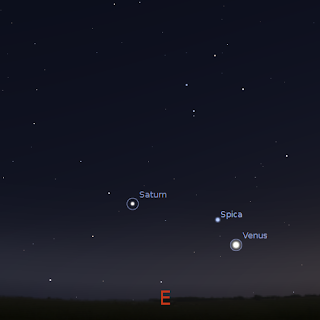 Morning sky looking east as seen from Adelaide at 5:00 am daylight saving time on Sunday November 21 showing Saturn and Venus. Similar views will be seen elsewhere at the equivalent local time. Click to embiggen.

The Full Moon is Monday November 22.

Bright white Venus continues to rise above the eastern morning horizon. At the begining of the week you will still need a fairly level, uncluttered horizon to see it. By the end of the week it should be easy to see from almost anywhere. Venus, Saturn and the bright star Spica form a line in the morning sky.

Saturn becomes easier to see in the morning as it rises higher in the twilight. By the end of the week the trio of Saturn, Spica and Venus will make an attractive morning sight. 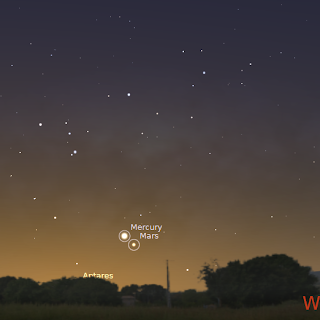 Mercury is climbing higher in the evening sky but will still not be very high, although it is much easier to see than last week. Like Mars before it, Mercury climbs the Scorpion and Mercury, Mars and Antares make a nice line. On the 21st Mercury and Mars are at their closest.

Mars is becoming harder to see in the twilight. It is the third brightest object above the western horizon, after the red star Antares (which means Rival of Mars) and Mercury. After this weeks encounter with Mercury, Mars sinks lower into the twilight.

The variable star Mira is still bright. this week the bright Moon will make it difficult to observe though.

The Leonid Meteor shower is at its peak on the morning of Thursday 18 November (17 November UT). Despite the sky being Moon free when Leo rises (3:00 am daylight saving time, best between 4-5 am daylight saving time), there will be very few Leonids seen from Australia, maybe 2-3 per hour. You can check predictions for you local site with the NASA meteor flux estimator (scroll down to 13 Leonids in the SHOWER box, make sure you have your location and date correct as well). If you are up that early anyway, looking at comet 103P Hartley, look to the east, you may see a couple of interesting meteors, but nothing spectacular. 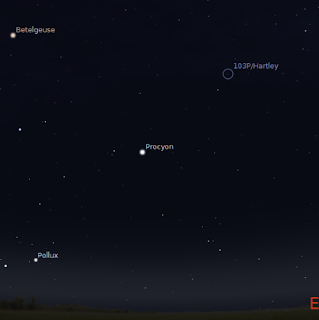 Comet 103P Hartley above the northern horizon at 1:00 am ACDST (midnight non-daylight saving time) as seen from Adelaide on November 24 , similar views will be seen from other places at equivalent local time.

Comet 103P Hartley 2 continues to rise higher in the southern skies. It is very high in the sky heading towards Canis major and Sirius, although the comet is fading, it is still visible in binoculars binoculars.

While the comet is rising earlier, advancing Moonlight means you still have to get up early in the morning to see it (between midnight and 4:40 am). By the 24th the comet will be in binocular range of a number of beautiful open clusters, including the delightful M47.

I Finally Know My Purpose In Life....
Geo-xcentricities part 2; the view from Mars.
Meet Archie
Another Kreutz Comet in STEREO
Web Conference on the Orign of Life
The Sky This Week - Thursday November 11 to Thursd...
Moon, Mars and Antares
Why ...
Hartleyid Update
More Images of 2010 V1