The First Quarter Moon is Sunday November 14. Mars climbs the Scorpion. Jupiter is easily seen in the evening sky. Venus visible together in the morning sky. Comet 103P Hartley climbs higher in the sky. The variable star Mira is brighter. 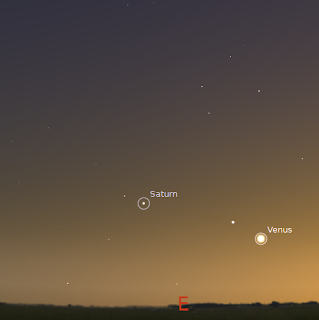 Morning sky looking east as seen from Adelaide at 5:30 am daylight saving time on Sunday November 14 showing Saturn and Venus. Similar views will be seen elsewhere at the equivalent local time. Click to embiggen.

Bright white Venus starts the week close to the eastern morning horizon, so you will need a fairly level, uncluttered horizon to see it. During the week it rises higher in the sky and comes closer to the bright white star Spica.

Saturn becomes easier to see in the morning as it rises higher in the twilight. By the end of the week the trio of Saturn, Spica and Venus will make an attractive morning sight. The newly discovered comet 2010 V1 is close to Saturn at the beginning of the week (but you will need strong binoculars and dark skies to see it) 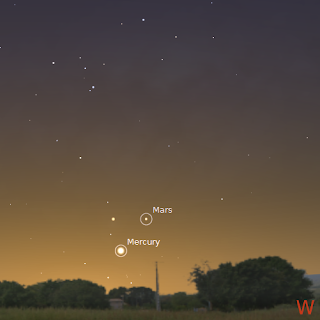 Mercury is climbing higher in the evening sky but you will need a clear level horizon to see it. On the 13th the Mercury and Mars from a triangle with the red star Antares. By the end of the week Mercury and Mars are close together.

Mars is becoming harder to see in the twilight. It is the third brightest object above the western horizon, after the red star Antares (which means Rival of Mars) and Mercury. During the week Mars draws closer to Antares and by the 13th they are closest.

The variable star Mira is very bright. You can follow it's changes in brightness when the Moon sets. 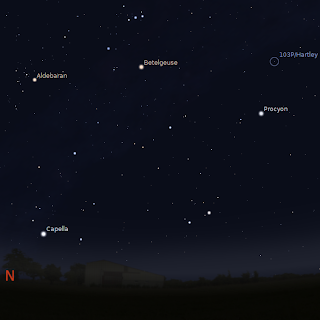 Comet 103P Hartley above the northern horizon at 2:30 am ACDST (1:30 non-daylight saving time) as seen from Adelaide on November 14 , similar views will be seen from other places at equivalent local time.

Comet 103P Hartley 2 rises higher in the southern skies this week. It is very high in the sky, above the bright star Procyon, but the comet is fading, and you now need binoculars to see it. And you do have to get up at dark o'clock to see it (between midnight and 4:40 am). The comet will be easily seen in binoculars, and it races through the sky through some pretty territory.