The First Quarter Moon is Friday October 15. Mars and Venus are not far from each other, but this is your last week to see Venus easily . Venus's crescent shape is easily seen in small telescopes and good binoculars. Jupiter is easily seen in the evening sky. October 14, occultation of pi Sagittarii. October 18, Comet 103P Hartley seen in southern Skies. Variable star Mira bright. 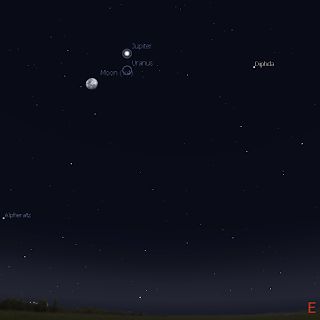 Evening sky looking East as seen from Adelaide at 8:30 pm daylight saving time on Wednesday October 20 showing Jupiter close to Uranus and near the Moon. Jupiter is just past opposition, but is still excellent in telescopes and binoculars. Similar views will be seen elsewhere at the equivalent local time. Click to embiggen.

The First Quarter Moon is Friday October 15.
Jupiter rises in the early evening, and can be readily seen from about 7:00 pm local time just above the eastern horizon. This is the last week you can easily see bright Jupiter rising in the east while Venus is still in the west. 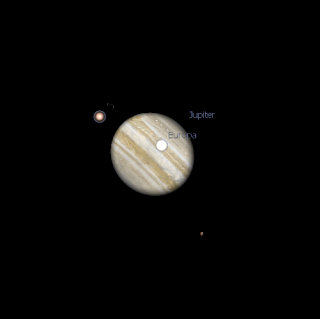 Ganymede just about to exit Jupiter's shadow, Europa and its shadow on Jupiter's disk and Io about to disappear behind Jupiter on October 20 at 23:15 ACDST (23:45 AEDST).

Jupiters' Moons are a easy to see whether you have binoculars or a telescope. Watching their eternal dance is always rewarding. The evening of Wednesday October 20 is particularly busy, with Ganymede coming out from under Jupiter's shadow (23:27 ACDST), Europa and its shadow on Jupiter's disk and Io disappearing behind Jupiter (23:24 ACDST).

This occurs fairly late in the evening (although Europa starts crossing Jupiter at 21:27 ACDST), but still early enough to watch and head off to bed without too much loss of sleep. 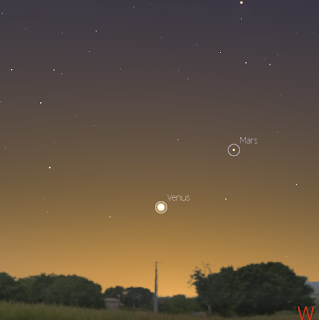 Bright white Venus is rapidly heading towards the horizon, and this is the last week it is still easily visible. Venus is visible above the western horizon from half an hour after Sunset, (even before) until just before the end of twilight (about an hour after sunset).

Venus is in the constellation of Libra, the Balance, but returns to Virgo this week. Venus is not far from to Mars but draws further away as the week progresses. Venus is visible crescent in small telescopes and 10x50 or stronger binoculars, and becomes dramatically bigger and thinner over the week, although it comes closer to the horizon, making observation more difficult.

Saturn is now lost in the twilight.
The variable star Mira is very bright. 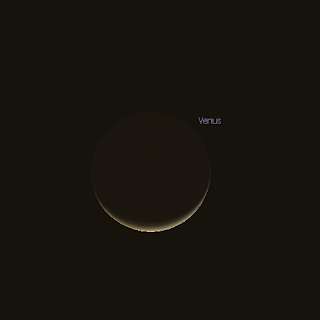 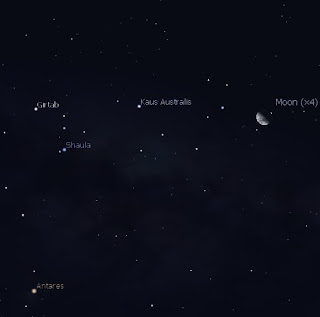 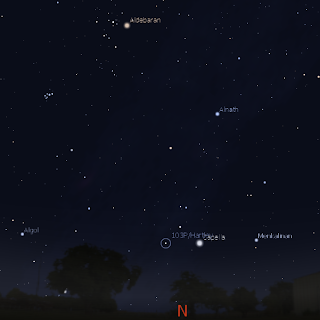 Comet 103P Hartley above the northern horizon at 4:30 am ACDST (3:30 non-daylight saving time) as seen from Adelaide on October 18, similar views will be seen from other places at equivalent local time.

Comet 103P Hartley 2 enters the southern skies this week. The comet may be between magnitude 5-4, and so should be seen as a faint fuzzy dot by the unaided eye. The comet will be best seen from dark sky sites. It will be easily seen in binoculars, and it races through the sky through some pretty territory (lots of binocular friendly open clusters).

Unfortunately Moonlight will begin to interfere by the end of the week. Click the link for Printable maps comet 103P/Hartley.

Star GRASing and some Good News!
Captured! An Iridium Flare and Jupiter
Where is Comet 103P/Hartley Now?
Massing of Venus, Mars, and the crescent Moon, Sun...
Iridium Flare Near Jupiter - Adelaide, Friday Octo...
Carnival of Space #172 is here.
Southern Skywatch October 2010 edition is now up!
The Sky This Week - Thursday October 7 to Thursday...
The Sky This Week - Thursday September 30 to Thurs...
Seeing Jupiter's Moons with the Unaided Eye.