Captured! An Iridium Flare and Jupiter 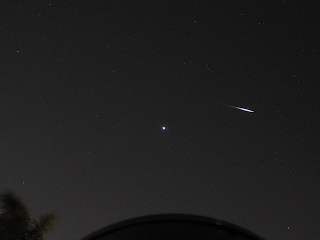 A -6.7 magnitude flare captured from suburban Largs North, Adelaide SA at 21:07 and a bit, 8 October 2010. Click to embiggen (can you find Uranus next to Jupiter?)

Yay! Success! After my last attempt at alerting people to a quirky satellite phenomenon, I managed to get this one right. After a cloudy day, Hughie blew the clouds away at sunset.

I tried something different this time. My telescope has an attachment to alow piggybacking a camera on it. So I mounted the camera and turned the tracking drive on.

This resulted in significantly less trailing in the images, but you can see the top of the scope in the image. Can do too much about the suburban sky-glow either. The camera is a Canon IXUS IS, ISO 400, 15 seconds exposure, F5.0. I used my bushwalking GPS to give me timing accurate to a fraction of a second.

And, yes. I not only got to see the flare (rather than peering intently at the timer and fiddling with gear while it occurs), but I got to capture it as well. 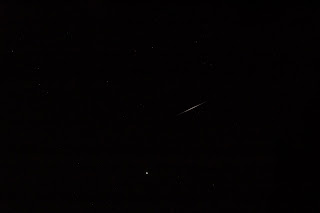 I was not the only one. Dean Male sent in this image viewed from Blackwood, SA (copyright Dean Male, so play nice). You need to click on it to embiggen for irridiumly goodness. He says:

Jupiter (due East) is the locator device at lower frame, generously provided by Gods of Serendipity.

How was everybody else's flare?

Comments:
Thanks SO much for the heads up - we're near Blackwood SA too and for once the clouds were absent and we dutifully went out at the appointed time and . . . wow! VERY kewl! Our first Iridium Flare! Cheers!

I did not get to see the flare. could it be a comet? I love astronomy.

Where is Comet 103P/Hartley Now?
Massing of Venus, Mars, and the crescent Moon, Sun...
Iridium Flare Near Jupiter - Adelaide, Friday Octo...
Carnival of Space #172 is here.
Southern Skywatch October 2010 edition is now up!
The Sky This Week - Thursday October 7 to Thursday...
The Sky This Week - Thursday September 30 to Thurs...
Seeing Jupiter's Moons with the Unaided Eye.
Me, Mercury and the European Planetary Science Con...
Carnival of Space #170 is here.