Where is Comet 103P/Hartley Now? 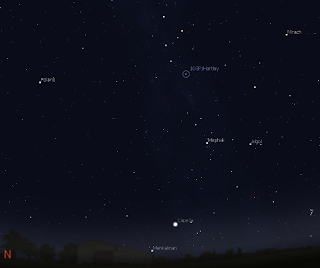 Evening sky facing north-east in the northern hemisphere at roughly 8:30 pm local time on 8 October. Comet 103P/Hartley is between Cassiopeia and Perseus. Click to embiggen.

Image rendered in Stellarium, Stellarium coordinates and instructions for adding 103P to Stellarium are here.

Comet 103P/Hartley is currently (for northern hemisphereians), in a rather beautiful part of the sky, for the next two days the comet, on the boundary of the constellations Cassiopeia and Perseus, is within binocular distance of a number of beautiful open clusters and nebula. These include NGC884, Stock 2, IC 1848 being some of the most prominent. 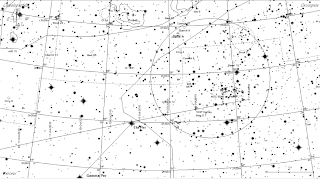 You will have the best views from dark sky sites of course, but even in places with modest light pollution the comet should be visible as a faint fuzzy dot.

Telescopically the comet is quite nice, there is quite an extended coma around the nucleus, but no really identifiable tail.

When looking for the comet, make sure you allow your eyes to dark adapt for at lest 5 or more minutes, the presence of many open clusters and nebula will also make it hard to be sure which is the comet and which is the cluster/nebula. However, in binoculars, the comet will be readily apparent as a fuzzy dot compared to the stars and extended nebula.

In space, Hubble is examining the comet in preparation for the EPOXI fly-by, the latest EPOXI images are here.

Comments:
Dear originator of the last report on Comet 103P - PLEASE, please, please do NOT use the term "embiggen" since it is NOT a real word. It widens the credibility gap between science community and their readers.
-Mark

Massing of Venus, Mars, and the crescent Moon, Sun...
Iridium Flare Near Jupiter - Adelaide, Friday Octo...
Carnival of Space #172 is here.
Southern Skywatch October 2010 edition is now up!
The Sky This Week - Thursday October 7 to Thursday...
The Sky This Week - Thursday September 30 to Thurs...
Seeing Jupiter's Moons with the Unaided Eye.
Me, Mercury and the European Planetary Science Con...
Carnival of Space #170 is here.
In which I am Revealed as an Idiot