Another Comet Does a Sundive 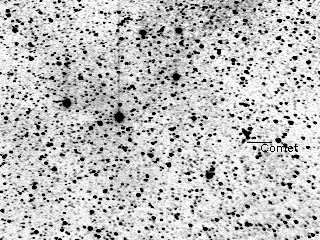 Bo Zhou's SOHO comet in the STEREO H1A imager, as it heads towards the Sun.

While comet 103P is taking all the limelight at the moment, another comet is about to make a splash.

Chinese comet observer Bo Zhou discovered a comet in images from the SOHO spacecraft. It is headed for a close rendezvous with the Sun, and that inconspicuous dot on the left there will get very much brighter. It may or may not survive it's encounter with the Sun.

An animation of the comet in the SOHO imager is here, courtesy of Spaceweather. And the comet has entered the STEREO COR2 chronograph (see image here), so we could be treated to some great images of the comet over the next day.


False coulour nimation of the comet in the H1A imager on 18-10-10 (Hat tip to Comet Al, Michal Kusiak, Karl Battams and the STEREOHUNTER crew)