In Which I Fail to See Comet 103P/ Hartley 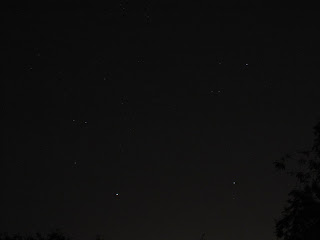 Northern horizon as seen from Largs Bay, Adelaide, at 4:30 an ACDST. Capella is the bright star near the bottom,

When I went to bed last night, the clouds had cleared for the first time in ages, so I organised to get up at 4:30 just in case it stayed clear.

I managed to stumble out of bed at the right time and navigated in the dark to the back door, picking up the camera and binoculars on the way.

I wasn't expecting to see much with the unaided eye, a suburban location, with the comet close to the horizon murk didn't give much hop of that. As well, there was a fluoro light just under where the comet was (just near the star forming the tip of the inverted triangle to the left of Capella).

But I didn't see anything in binoculars either, I could see down t at least magnitude 7.5, so I should have picked it up easily, and the camera shot, which picked up stars down to magnitude 7.3, should have shown a faint smudge too.

So it looks like I'll have to wait a couple of days until the comet is higher.

Comments:
The comet is extremely large and diffuse, so you need a very dark sky background to pick it up, even with binoculars and its total brightness in the 5 to 6 mag. range. I've seen it well only once, so-so a couple of times and not at all in about as many cases - although it was very high in the sky here in Europe.

The fact that the brightness is spread over such a large area and that the current perigee is a disadvantage instead of an advantage hasn't been communicated well, though I've tried to convey that message in a number of places.

I've been convinced this comet was a playful hoax for weeks - tried to find it in a 5" scope and a 3" - nothing. But couldn't sleep last night, got up at 2:30 and had a look in 7x binoculars and there it was high up exactly where you describe but yes a very misty object. Glad to see it - hope you have better luck soon. Alan, Sheffield, England