The Full Moon is Saturday October 23. Mars near the head of the Scorpion. Venus low on the horizon. Venus's crescent shape is easily seen in small telescopes and good binoculars. Jupiter is easily seen in the evening sky. Comet 103P Hartley at its brightest. Variable star Mira bright. 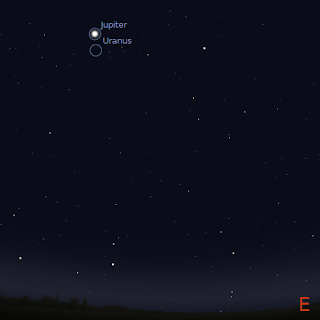 Evening sky looking East as seen from Adelaide at 9:00 pm daylight saving time on Wednesday October 27 showing Jupiter close to Uranus. Jupiter is just past opposition, but is still excellent in telescopes and binoculars. Similar views will be seen elsewhere at the equivalent local time. Click to embiggen.

The Full Moon is Saturday October 23.
Jupiter rises before sunset, and can be readily seen from about 7:00 pm local time just above the eastern horizon. 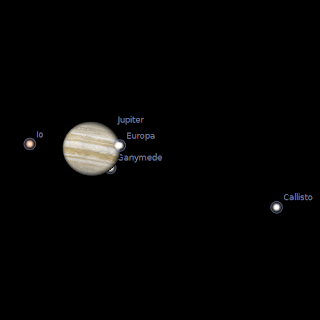 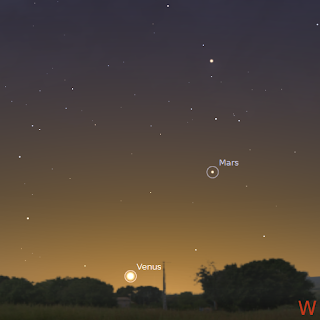 Venus is in the constellation of Virgo this week. Venus is now well below Mars and draws further away as the week progresses. Venus is visible crescent in small telescopes and 10x50 or stronger binoculars, and becomes dramatically bigger and thinner over the week. Venus's close proximity to the horizon makes telescopic observation extremely difficult, and almost impossible by the 28th.

Mars is distinguishable by its reddish colouring and is the brightest object above Venus. During the week it draws closer to the head of the Scorpion.

Saturn is now lost in the twilight.
The variable star Mira is very bright. 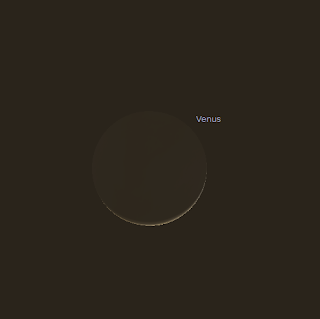 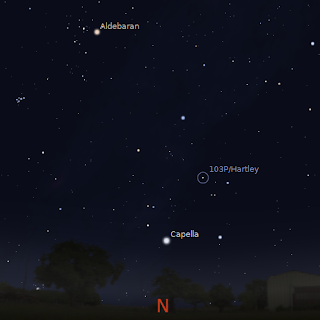 Comet 103P Hartley above the northern horizon at 4:30 am ACDST (3:30 non-daylight saving time) as seen from Adelaide on October 22, similar views will be seen from other places at equivalent local time.

Comet 103P Hartley 2 rises higher in the southern skies this week. The comet will be at its brightest on October 22, but will still be faint, between magnitude 5-4, and will be seen as a faint fuzzy dot by the unaided eye. And you do have to get up

The comet will be best seen from dark sky sites. It will be easily seen in binoculars, and it races through the sky through some pretty territory (lots of binocular friendly open clusters).

Unfortunately Moonlight will significantly interfere after the 22nd. Although the comet will still be readily visible in binoculars, it will be difficult to spot with the unaided eye until the Moon wanes. Click the link for Printable maps comet 103P/Hartley.
Printable PDF maps of the Eastern sky at 10 pm ADST, Western sky at 10 pm ADST. For further details and more information on what's up in the sky, see Southern Skywatch. Cloud cover predictions can be found at SkippySky.