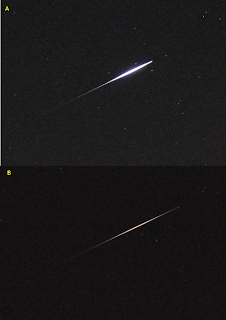 Iridium flare captured simultaneously at a) Largs North, SA and b) Black wood SA. You may need to click on the image to embiggen and see that the flare trail is shifted with regard to the stars.

Back on October 8 I and some other people were fortunate to witness a bright Iridium flare near Jupiter. I got a nice shot from my camera (mounted on my telescope with the drive going to stop star trailing), and Dean Male from Blackwood kindly sent me his image captured at the same time.

One thing that I noticed was that the image of the flare was slightly shifted with regard to the background stars. This represented a great opportunity to measure parallax in these images and do ... something. 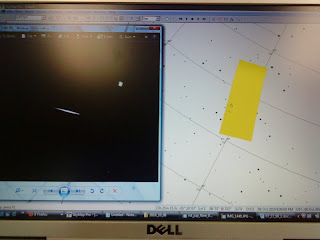 Well, I measured the separation of the trails, using the sophisticated method of scaling SkyMap charts to the same scale as the images at full resolution, and using a bit of paper to plot the flare location.

and estimating that Largs and Blackwood are roughly 25 km apart as the crow flies I get .... the iridium satellite was 2,326 Km up.

Which, as they orbit around 800 Km up, is a 300% error. I tried the formula out on the lunar separation measured here, and got the right result. Using the more complex formula:

Either Dean and I were 8 Km apart or the flare images separation was 3 times larger than I measured (not likely) or I'm doing something very wrong, or the formula is not appropriate for small separations of observers (The amateur Moon calculation was done from observers over 2000 Km apart, this won't work fro iridium flares which are only observed in a small area).

Anyone have any ideas? UPDATE: There is at least a partial solution to the Puzzle. In my original posting I had estimated that Dean and I were 25 Km apart, based on my rough measurements from Google maps. But that was from points that Google decided were Largs North and Blackwood. Dean sent me the flare information from his site, and from that I could calculate that we were 13 Km apart, not 25.

This gives a distance of 1209 Km, within 20% of the distance to the satellite from my site (1022 Km given by CalSky), still not the orbital distance (790 Km) but a heck of a lot better than 200%. JupiterIsBig (see comments) sent me the following diagram:

which illustrates the sorts of correction we need to fix our calculations. I'm waiting for JIB to give this math's challenged biologist explicit instruction on how convert Altitude and Azimuthal data into correction factors.

Comments:
Hi Ian, what was the azumith for the flare from one of those positions ? I would assume it was not 90 degrees.
The equation you used assume small angles - i.e. the target distance >> the separation distance and therefore the triangle is close to being a right triangle.
I also saw on http://en.wikipedia.org/wiki/Parallax that 1/2 the angle is used. When the MotoGP is finished I will look into it closer.

Hmm, the Azimut was 69 degress, according to CalSky, Dean reports that CalSky returns a distance of 1012 Km horizontally distant from Adelaide.

If you really do use half the angle, that make it even worse (4000 Km). Hmm, definitely need to think on this

I was cheering on Casey at the time and not really concentration - I meant Altitude.
You could use the Alt. and Az. from both locations to triangulate the altitude, but that's not the point of the post.
BTW that equation uses half the angle, and half the separation ...
I'll think about it when the little ISS spotters are in bed.

I fail to see how the equation can ignore the position on the earth, unless the spacing is so large relative to the earth's diameter and small relative to the distance of the object that it's not important.
For example, imagine that the iridium flare is near the horizon, then as theta goes to zero, you'll get a huge result for D. Me thinks it works when the object is nearly straight up.
From http://www.perseus.gr/Astro-Lunar-Parallax.htm
"...suggests an Earth-Moon distance of 438,988 km which is 10% higher than the actual distance...
However, if a correction is applied so that Athens and Selsey are on the same physical plane when facing the moon, the computed distance is now 404,897 km or in error by only 2.37%"
I read that as meaning they had to correct for the angle of the baseline.

Picture emailed to you.