The First Quarter Moon is Wednesday September 15. Mars, Venus and Spica form a triangle in the sky. On Saturday September 11 the Crescent Moon joins the trio. On Tuesday September 14 the waxing Moon is near the red star Antares. Jupiter can be seen in the east in the late evening. Jupiter and Uranus are seen close together in binoculars and telescopes. 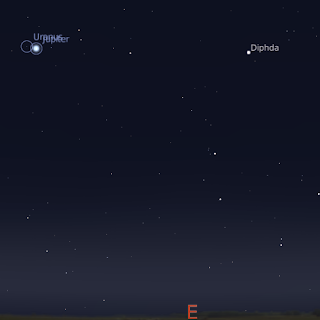 Evening sky looking East as seen from Adelaide at 8:30 pm on Wednesday September 15 showing Jupiter close to Uranus. Similar views will be seen elsewhere at the equivalent local time. Click to embiggen.
The First Quarter Moon is Wednesday September 15. On Tuesday September 14 the waxing Moon is near the red star Antares.
Jupiter rises before midnight, and can be readily seen from about 8 pm local time just above the eastern horizon. At the beginning of the week you can see bright Jupiter rising low in the east while Venus is still in the west. Jupiter will be at opposition next week, when it is at its biggest and brightest, so now is a good time to look at it in a telescope.

Jupiter and Uranus are close together and can be seen near each other in a pair of binoculars. Uranus is the brightest object within a binocular field north of Jupiter, and is in fact bright enough to be (just) seen with the unaided eye under dark sky conditions. A binocular spotters map is here. During the week Jupiter and Uranus come closer and by the end of the week they are visible together in low power telescope eyepieces.

Jupiter is still visible in the early morning in the north-western sky as the brightest object low above the horizon. 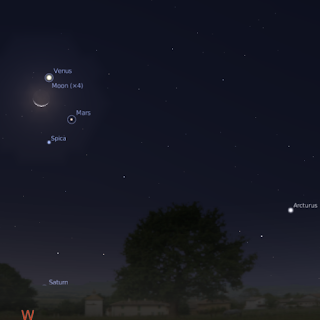 Venus is in Virgo the Virgin, close to Mars and the bright star Spica (alpha Virginis) forming a triangle. Venus rises higher during the week, and is a visible crescent in small telescopes. On Saturday 11 Spetember, the crescent moon joins the trio of Venus, Mars and Spica. Mars is distinguishable by its reddish colouring just above Spica. Saturn is low in the twilight, just above the horizon.

Saturn is visible low in the western evening twilight sky as the bright yellow object well below Venus and Mars. During the week Saturn comes closer to the horizon and is more difficult to see. On Thursday September 9 the thin crescent moon will be close to Saturn, but you will need a clear, level horizon to see them together.

Comet 103P/Hartley via GRAS
Comet 103P/Hartley, a Comet with a Bright Future
Venus, Spica and Mars in a Line
See Baroness Greenfield at the Florey Lecture (Fri...
The Return of We can be Heros (just for one Day)
Venus, Mars and Spica
Southern Skywatch September 2010 edition is now up!
The Sky This Week - Thursday September 2 to Thursd...
Missed Out On Encke and the Sombreo Galaxy
Star Party in Memory of Jeff Medkeff