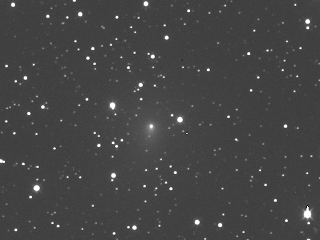 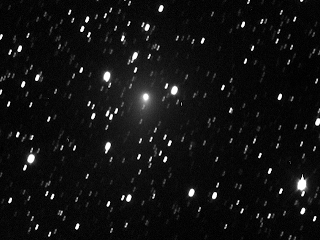 So it's been pelting down with rain here. In Australia, when a drought breaks, it BREAKS. With with all the flooding, people hit by lightning, not to mention the 70 Km/hr winds removing the garden furniture, astronomy is off the menu, so to speak. Even the Global rent-a-scope facility up north has been hit by really bad weather.

However, the global rent-a-scope network has scopes over in New Mexico, USA. So while the Australian network is under cloud, now was a good time to try and see if I could image 103P/Hartley. The great thing about the US scopes is that it's deep night over there while it's daytime here, so I don't have to wait up until the wee hours for the comet to rise.

I imaged the comet using the medium deep scope GRAS-05. I went for 120 second exposures because of my previous experience with the scopes. I took 4 concurrent exposures. For the images above I took the pre-calibrated files the system sends back. The first is a single file with brightness and contrast adjusted using ImageJ. In the second, I manually aligned the comet images in ImageJ (using the translate function, a right pain let me tell you), then added them with the image calculator function, then messed around a little with the contrast.

The result isn't too bad, the stacked image shows a decent coma and little tail. People aren't getting much better structure with longer exposures and more stacking. Here's a false colour animation I made from those 4 images (the bright objects to the right and below are hot pixel artefacts I can't get rid of). I'll certainly be keeping a remote eye on this comet as it evolves.

Comet 103P/Hartley, a Comet with a Bright Future
Venus, Spica and Mars in a Line
See Baroness Greenfield at the Florey Lecture (Fri...
The Return of We can be Heros (just for one Day)
Venus, Mars and Spica
Southern Skywatch September 2010 edition is now up!
The Sky This Week - Thursday September 2 to Thursd...
Missed Out On Encke and the Sombreo Galaxy
Star Party in Memory of Jeff Medkeff
Mobile Phone Moon again (and Jupiter)