The New Moon is Wednesday September 8. Mars, Venus and Spica form a triangle in the sky. Mars closes in on the bright star Spica. Jupiter can be seen in the east in the late evening. Jupiter and Uranus are seen together in binoculars 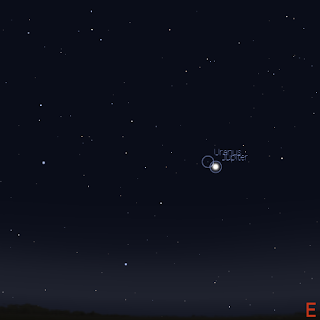 Evening sky looking East as seen from Adelaide at 8:30 pm on Thursday September 9 showing Jupiter close to Uranus. Similar views will be seen elsewhere at the equivalent local time. Click to embiggen.
The New Moon is Wednesday September 8.
Jupiter rises before midnight, and can be readily seen from about 8 pm local time just above the eastern horizon. At the beginning of the week you can see Jupiter rising in the east while Venus is setting in the west.

Jupiter and Uranus are close together and can be seen near each other in a pair of binoculars. Uranus is the brightest object within a binocular field north of Jupiter, and is in fact bright enough to be (just) seen with the unaided eye under dark sky conditions. A binocular spotters map is here. During the week Jupiter and Uranus come closer.

Jupiter is still visible in the early morning in the north-western sky as the brightest object low above the horizon. 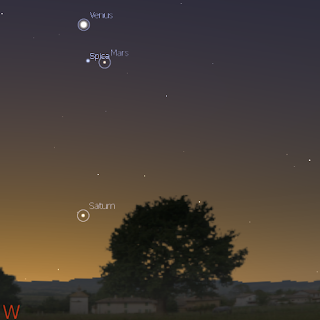 Venus is in Virgo the Virgin, close to Mars and the bright star Spica (alpha Virginis) forming a triangle. Venus rises higher during the week, and Mars closes in on Spica, coming closest on the 6th. Saturn is low in the twilight, just above the horizon.

Mars is distinguishable by its reddish colouring.

Saturn is visible low in the western evening twilight sky as the bright yellow object well below Venus and Mars. During the week Saturn comes closer to the horizon. Telescopic observation of the ringed world is now extremely difficult as Saturn sets earlier. On Thursday September 9 the thin crescent moon will be close to Saturn, but you will need a clear, level horizon to see them together.