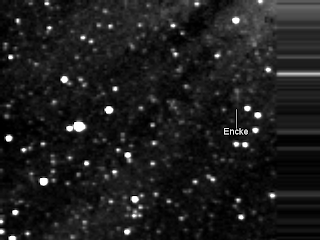 Comet 2P/Encke in the STEREO spacecraft H1A imager on 23 August 2010. It's the faint tadpole like thing above the line.

A downloadable AVI of 2P Encke is here.

This is probably the only view of comet 2P/Encke that I will get this time around. Bad weather has been messing up both my views and the GRAS remote telescope site.

There is an embarrassing tale associated with this image though (scroll down below video).

Comet Al asked the stereohunter group if a comet he found in the H1 imager was likely to 2P/Encke. Now, a while back I had entered the orbit of 2P/Encke in Celestia, in order to see if it did go through either the H1A or H1B imagers, using the latest JPL Horizons orbital data (and double checking the positions in SkyMap). I ran the orbits forwards a fair way, but they didn't come into the H1A FOV. So I told Comet Al, no, it's unlikley, but I would recheck with the latest orbital data.

So I generated an ephemeris to cover the date that Comet Al observed his comet, generated positions in SkyMap and checked against the FOV of the H1A imager and nope, it wasn't in the FOV. Very suspiciously it was right next to where Comer Al's comet appeared, but I emailed back saying "nope, not Encke".

Shortly after, when everyone else was emailing "Yes, it's Encke" did I realise I misread the dates on the impage time stamps, and had generated positions of the 20th, not the 23rd, when the images were actually taken.

Comet 2P/Encke meets the Sombreo Galaxy
Comet 2P/Encke update
Perseid Meteor Roundup
Update on Potential Jupiter Impact
The Sky This Week - Thursday August 26 to Thursday...
My Seminar With Ian Plimer
Another Asteroid/Comet Impact on Jupiter
Venus with Angel (but no comet)
A Ceiling Full of Sky
There's a Comet Under There