The Sky This Week - Thursday August 26 to Thursday September 2

The Last Quarter Moon is Thursday September 2. Mars Venus and Saturn form an elongated triangle. Venus closes in on the bright star Spica. Mercury is lost from view. Comet Encke may be visible in binoculars. Jupiter can be seen in the east in the late evening. 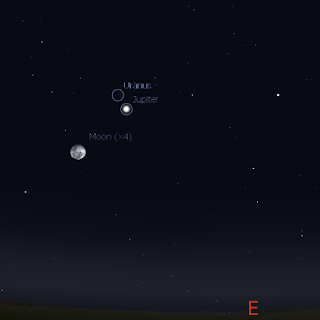 Evening sky looking East as seen from Adelaide at 10:00 pm on Friday August 27 showing Jupiter close to the Moon. Similar views will be seen elsewhere at the equivalent local time. Click to embiggen.
The Last Quarter Moon is Thursday September 2.
Jupiter rises before midnight, and can be readily seen from about 9 pm local time just above the eastern horizon. By the end of the week you can see Jupiter rising in the east while Venus is setting in the west. On the 26th and 27th Jupiter is close to the Moon. You may be able to use the Moon to guide you to see Jupiter in the daylight, but Jupiter and the Moon set soon after Sunrise. 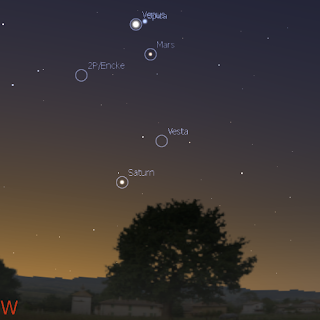 Mercury can be seen above the western horizon from half an hour after sunset. By the end of the week, it is lost in the twilight.

Comet 2P Encke may be visible in binoculars at the beginning of the week, but is rapidly lost to view. Those with telescopes may see Encke near the Sombreo galaxy on the 30th.

Bright white Venus is readily visible above the western horizon from half an hour after Sunset, (even before) until past the end of twilight (about an hour and a half after sunset). Venus is now in Virgo the Virgin, close to Mars with Saturn below forming a long, narrow triangle. Venus closes in on the bright star Spica, alpha Virginis and is closest on the 31st. During the week Mars also comes closer to Spica.

In the evening Mars can be seen low in the north-western sky. Mars is below Venus, at the beginning of the week. Mars is distinguishable by its reddish colouring.

Saturn is visible low in the western evening sky as the bright yellow object below Venus and Mars. During the week Saturn draws further apart from the pair. Telescopic observation of the ringed world is now difficult as Saturn sets earlier.

Comments:
I live in Moreno Valley, CA, USA. In the early morning I see a planet/star to the lower left of the moon. Is that Jupiter?

Yes, that is Jupiter. Beautiful wasn't it.

My Seminar With Ian Plimer
Another Asteroid/Comet Impact on Jupiter
Venus with Angel (but no comet)
A Ceiling Full of Sky
There's a Comet Under There
Carnival of Space #167 is here.
A Nice View of Moon and Planets
Mercury, Crescent Moon and a Triangle in the Sky
Start Looking for Comet 2P/Encke Tonight!
The Sky This Week - Thursday August 19 to Thursday...