Music, Moons and a Partial Eclipse 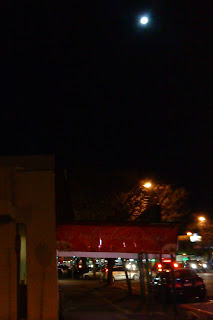 For the August 2007 Lunar eclipse we held an eclipse pizza party. For this June 2010 partial Lunar eclipse, the Bettdeckererschappneder Weisel's (BDW for short) choir had a concert on, and the elder kids were over friends places. I was being door man and general factoum for the concert. This just involved me looking clueless and taking peoples money, but they raised a decent contribution for the Hutt Street Centre on the night. I alerted people to the existence of the eclipse, and asked them to look up after the concert.

The concert was terrific (as NFBM concerts always are). And the BDW was pretty good in that Joe Jackson song about pretty women walking with gorillas, although my favourites were "Blue Moon" and "My Johnny".

After the concert we headed out for dinner with the choir, and a gorgeous full moon floated above us. 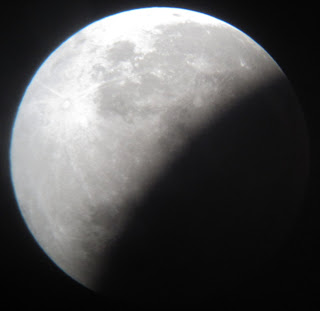 We had dinner at a marvellous Malaysian restaurant, where SmallestOne entertained us by demonstrating centrifugal motion with the table caddy (and crawled under the table tickling people), and I talked astronomy and eclipses.

Unfortunately, service was a little slow, so by the time we had dinner we had to rush out again to pick up MiddleOne from his friends place. As we left, I pointed out the chip in the side of the Moon to Smallest one.

We finally got home, unloaded sleepy children and various props from the singfest, and then I got ready to observe the eclipse.

Lunar Eclipse progression from 9:30 pm to 10:30 pm. Photo setup as for image above, click to embiggen.
An animated GIF file of the eclipse can be found here. 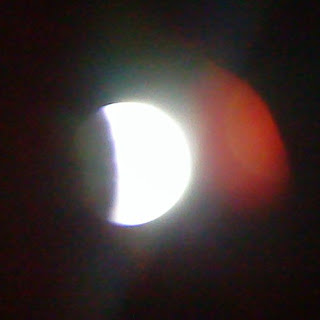 Eclipse imaged with a mobile phone held up to the lens of 10x50 binoculars.

By this time the eclipse was past maximum, so I used the 4" Newtonian, rather than Don, the guided 8" , as it is very quick to set up. I also used my lens-to lens camera adapter for the imaging and attached my Canon IXUS 100 IS.

This turned out to be harder than I imagined, as the auto exposure adjust kept overexposing the image, making it hard to focus on the already indistinct lunar markings. I had to use auto exposure, as the Canon IXUS 100 IS fixed exposures don't go below 1 minute, and I needed on the order of 1/10 to 1/60th of a second. For some reason, as the eclipse waned, the auto exposure made the image darker (which is why the animation looks weird).

Anyway, buy the time this was all set up and running, it was 9:30. The Eclipse was still spectacular though. Then I alternated between taking images and helping the BDW get ready for her work trip, as she was leaving 6:00 am Sunday (Yikes). I also took some shots with my mobile phone through 10x50 binoculars, but this wasn't as successful as using it through a telescope. Still, I was able to watch the sky grow lighter, stars dissapear, and see the shadowof earth slip slowly off the face of the moon. All in all a magical evening, rounded off with hotc chocolate in bed.

Today MiddleOne asked me "what's the point of an eclipse when not all the Moon goes dark?" It's still dashed pretty, that's what the point is.

I you want to hear (and see faintly) the BDW's choir in action, singing "Blue Moon" (definitly a song to watch eclipses by), click on the animation below.